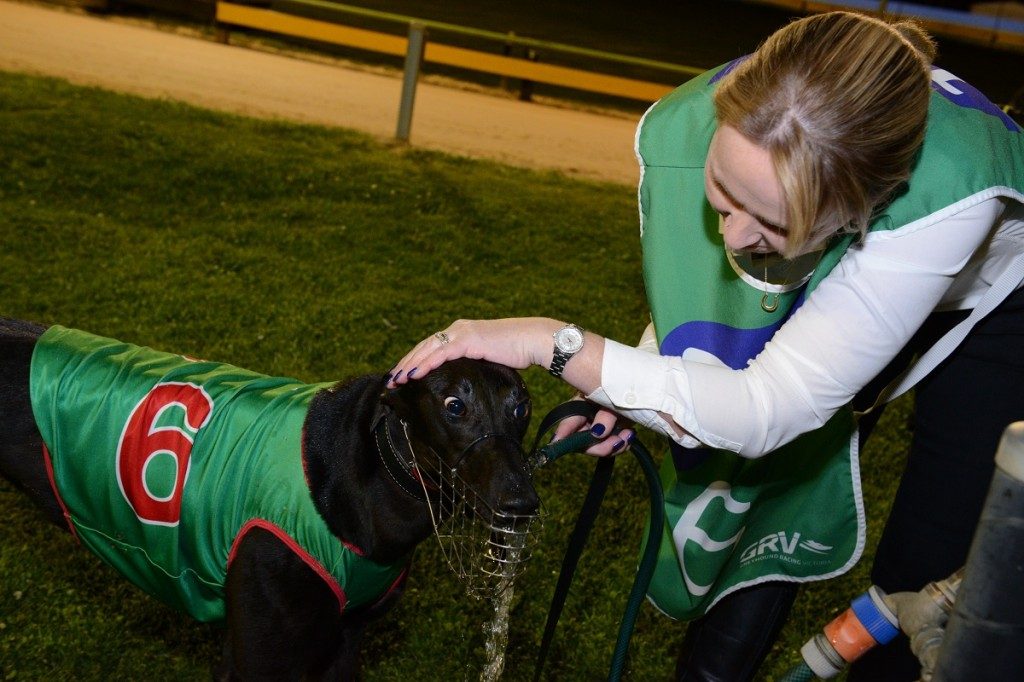 
Black Opium’s meteoric rise continued at Sandown Park last night with the undefeated youngster charging into the final of the TAB Melbourne Cup.

Still just 19 months of age, Black Opium again showed her trademark brilliant early speed to cross the high class field from box six and lead through the first turn, extending her lead at every split to score by 4½ lengths in 29.21, the fastest time of the night. It was her seventh career win from as many starts and her fourth in a row at Sandown Park. Ominously, she improved on each of her early splits and shaved almost two lengths off her best overall time.

“She’s really starting to put it all together now,” said her trainer, Seona Thompson who won the 2017 TAB Melbourne Cup with Aston Dee Bee.

“Even when she arrives at the track she’s starting to understand what the process is but it’s still a big learning experience for her and she’s loving racing. It was quite funny actually, when she has enough of parading she stops and looks at the starter as if to say ‘come on, let’s race.’

“It’ll be a massive step up again for her next week and I really don’t know how she’ll handle the crowd and noise of a Melbourne Cup final, but she is wonderfully relaxed dog and what she’s done already at her age is very special.”

If she can make it eight wins in a row next Friday night, she would create history by becoming the youngest and least experienced chaser to win the world’s greatest greyhound race.

But to do so she’ll need to overcome kennelmate Poke The Bear who recorded perhaps the most impressive victory of the night by chasing down star NSW chaser Miss Splendamiro in a slick 29.24.

Miss Splendamiro began well from the inside draw while Poke The Bear began cleanly before finding traffic at the first turn to settle fourth two lengths adrift. Down the back, Miss Splendamiro opened a fourth length break however Poke The Bear soon found clear air and began his move, stalking the early leader off approaching the home turn before switching to the rails and charging to an impressive 1½ length victory.

It was the popular white dog’s 10th win from his last 13 starts which has included brilliant victories in group 1 Topgun, group 3 Silver Bullet and Sandown Speed Star match race series, and victory in the TAB Melbourne Cup would double his carer prize money to $871,245 and become the seventh highest prize money earner in history.

“What he’s done in the last few months has been amazing, I don’t think we’ve ever had a dog racing in the form he’s in at the moment.”

“He’s such a fast dog and very smart. I think with the right conditions and luck in running he could get down to 29 seconds at Sandown, and he’s shown that he can come from behind and run down very good dogs. He’s such a hard chaser he’s going to be a good chance in any race he’s in.”

Black Opium and Poke The Bear were installed $2.60 equal favourites by tab.com.au in the pre-box draw market.

In the other TAB Melbourne Cup heats, My Redeemer and Hasten Slowly staged an epic match race with My Redeemer prevailing by a neck in 29.27.

Punters couldn’t separate the pair with the sons of Fernando Bale jumping as equal favourites, and little would separate them in the run either. Jumping from the inside boxes, Hasten Slowly (box 1) and My Redeemer (2) began together and within a matter of strides had established a break over the rest of the field. My Redeemer held a narrow margin past the post the first time however Hasten Slowly punched through on the rails to take the lead. The two favourites raced clear of the pursuing pack, establishing a five length break on the field as they staged one of the most memorable battles seen in a TAB Melbourne Cup heat.

There was less than a length between the pair for the entire 515m journey and never more than a neck between then in home straight, with My Redeemer nabbing his determined rival in the final stride.

Litter mates Notorious Mac (29.53) and West On Augie (29.31) won the night’s opening two heats for trainers Des Douch and Robert Britton respectively. It was a welcome return to form for West On Augie hadn’t won since the group 1 National Sprint Championship in August and had finished last in each of his last two starts, while for Notorious Mac his 12th career victory was the first in open class.

Dyna Harpa, perhaps the most under rated of Andrea Dailly’s eight TAB Melbourne Cup contenders, booked her berth in next Friday night’s final with a determined victory in 29.42. It was an emotional victory for Dailly who fought back tears during her post race interview, the win being a special one for a dog she has long said is her favourite in the kennel.

Degani caused the upset of the night when he saluted at $34.30 in the night’s penultimate heat. Degani began cleanly from box 3 to follow Fully Loaded through the first turn, and from there always looked the winning chance, scoring in 29.31 and giving McMahon his first TAB Melbourne Cup finalist.

In the final heat, She’s Gifted upstaged the well supported Barooga Brett and Orson Allen to register a brilliant all of the way win in 29.29. Trainer Debbie Coleman and handler Rob Camilleri were overcome with emotion after the victory, and gave the members of the Tsols Tips Syndicate their biggest thrill in the sport.

Also on the night were four heats of the $150,000 Bold Trease for stayers, with pre-series favourites Barcali (41.63) and Poco Dorado (41.64) showing why they are considered the dogs to beat with impressive heat victories. Soda Flash (41.80) and Black Impala (41.89) recorded their first wins over the Sandown ‘half-mile’ to take out the other heats.

The box draw for the TAB Melbourne Cup and Bold Trease will be conducted at Sandown Park on Sunday 18 November and will be telecast live on Sky Racing from 10.30am.

TAB Melbourne Cup carnival action continues at Sandown Park on Sunday afternoon with the semi finals of the GRV Vic Bred Maiden series and heats of the GRV SUPER Vic Greys. The two final will also be run on TAB Melbourne Cup night, part of a record eight feature race finals with a total $1m in prize money on offer.