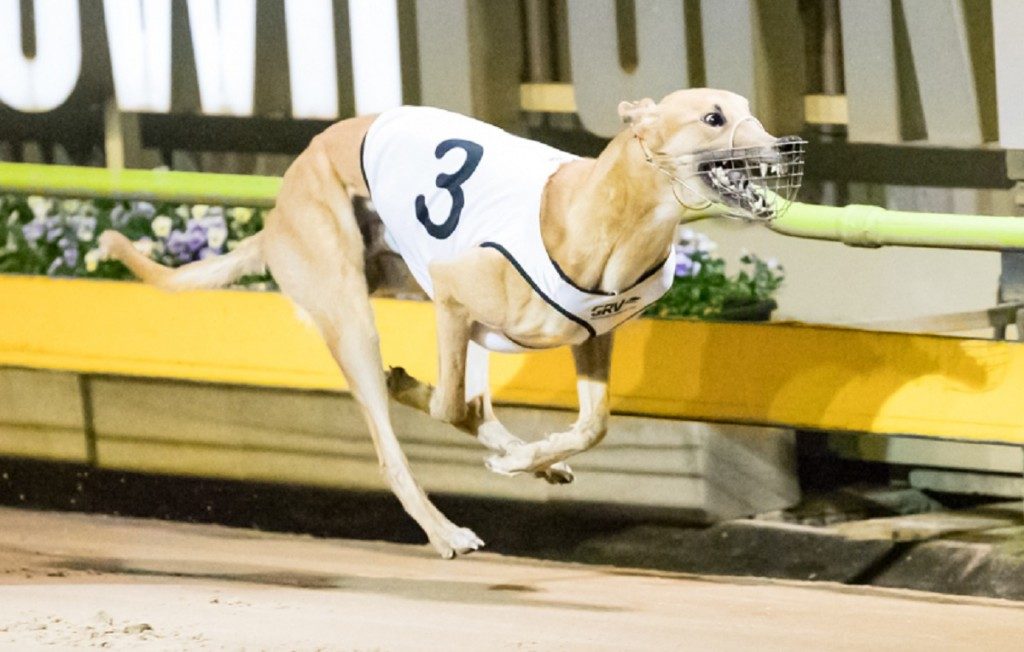 
Correy Grenfell believes Orson Allen is by far the best dog he’s ever trained and showed why with a brilliant 29.18 victory at Sandown Park last night.

In his first start since running second in the group 2 Geelong Cup, Orson Allen stepped cleanly from box 3 and settled second behind the in-form She’s Gifted. With She’s Gifted carving stunning sectionals out in front, Orson Allen switched to the inside and railed strongly turning for home, powering to the lead to scoring by half a length in a brilliant 29.18 seconds. The time was three lengths faster than his previous best winning time, and almost a length faster than he ran in September’s Speed Star match race series.

“He’s starting to put it together at the right time,” said Grenfell.

“We hoped that at this time, around Melbourne Cup time, he’d mature into a nice dog.”

Now a winner of 14 of his 28 career starts and over $115,000 in prize money, Orson Allen has drawn box 4 in Monday night’s group 3 Silver Bullet at The Meadows, however Grenfell is now giving consideration to also contesting the $25,000 group 3 Shootout at Sandown Park three days later.

The Shootout is a four-dog exhibition of the fastest greyhounds in the country and carries a $25,000 winner-takes-all prize. Given Orson Allen’s run was the fastest time at Sandown Park since Poke The Bear stopped the clock in 29.12 in September, it would be hard to deny the fawn chaser a berth in the race should he nominate. Indeed, tab.com.au slashed his odds for the Shootout from $8 into $4 following his devastating victory.

Asked whether Orson Allen be nominated for the Shootout, Grenfell was non-committal especially with the heats of the $630,000 TAB Melbourne Cup the week following.

“There’s a chance of it happening, but it all depends on how he pulls up. He’ll tell us if he wants to run.”

Grenfell, 24, narrowly missed a winning double after his versatile chaser Dyna Chancer had earlier finished second to the slick Barcali in a special event over 715m. A son of TAB Melbourne Cup winner Dyna Double One, Dyna Chancer has just one win in 14 starts since June however Grenfell is confident that he is now over a number of nagging injuries and is close to returning to his best form.

“I was quite pleased with the run, he found the line a lot better. We knew he would with a couple of more 700s, and after the problems we’ve had, that he’d get back to near his best.”

Dyna Chancer will be set for the $150,000 group 1 Bold Trease to be run on TAB Melbourne Cup night on Friday 23 November.

Orson Allen storms into contention for the Shootout with a brilliant 29.18 gallop

Maurice Minor, another Shootout contender, recorded an impressive victory later on the card when he came from mid-field to record a 29.32 victory. It was just his second win in seven attempts at Sandown Park, however the Queenslander did run 29.20 when running second to My Redeemer in May, and ran 29.55 at Albion Park – the fourth fastest time ever at the Brisbane circuit – before embarking on his Victorian campaign.

Aston Kimetto remains the hot favourite for the Shootout following confirmation of his nomination earlier this week. The Geelong Cup winner opened $14 in early Shootout markets but has been backed into $3 to be the clear top pick.

Meanwhile connections of Miss Splendamiro also confirmed that they will nominate for the Shootout after previously indicating she would round out her TAB Melbourne Cup preparation via a grade 5 series at The Meadows. Miss Splendamiro was recently transferred to Lara trainer David Geall for her Victorian campaign, and secured her TAB Melbourne Cup heats berth by winning a Prelude in her first start in his care.

Nominations for the Shootout, as well as the final TAB Melbourne Cup Prelude series, close at 11am on Monday 5 November.