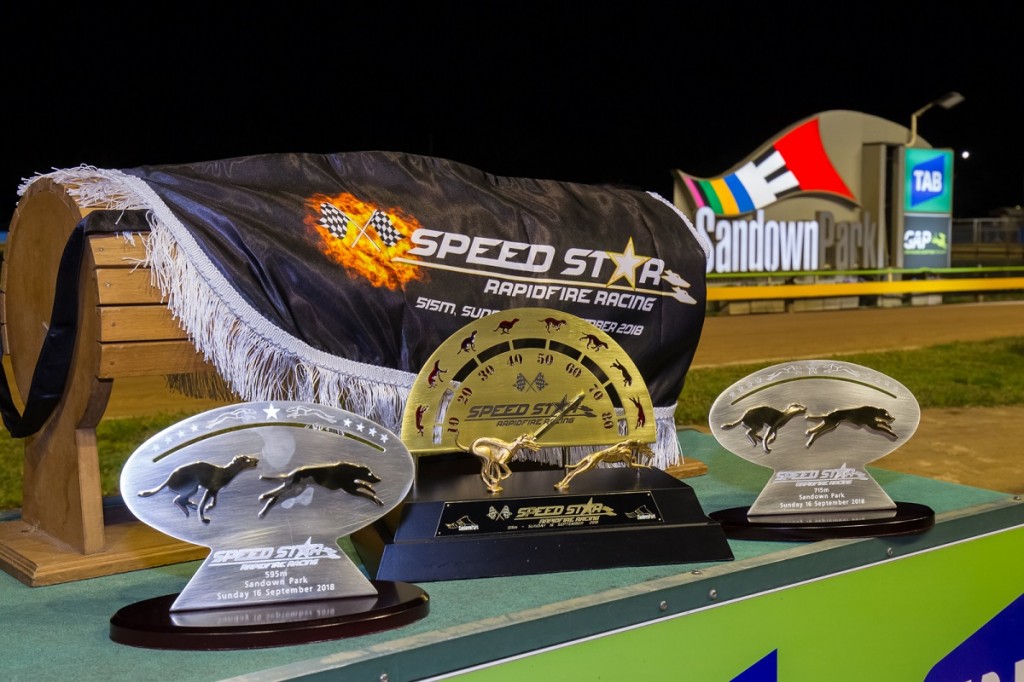 
Greyhound racing’s most exciting format is back!

Forty of the country’s fastest chasers racing in 20 head to head for a chance to share in $190,000 in prize money and the title of Australia’s fastest greyhound. With matches jumping every 8 minutes you won’t want to miss a moment of the action.

Where: Sandown Greyhound Racing Club, View Road, Springvale
How to get there:
Drive: Free parking is available on View Road, and on Lightwood Road opposite the Sandown Park train station.
Train: Sandown Park station is on the Dandenong/Pakenham/Cranbourne line. The track is a two minute walk from the station
Time: Gates open at 4pm
First match: 5.39pm
TV: Dave Carlson and James van de Maat host a special showcase coverage on Sky Racing 2 (channel 527) from 5.30pm, FREE for all Foxtel subscribers for the entire night!
Radio: RSN – Racing and Sport (927am or stream online here)
Race caller: Rob Testa
Race format: Greyhounds qualify based on their times at Sandown Park in between 1 May 2018 and 9 September 2018. Greyhounds compete against one other greyhound head to head, with prize money won by the winner of each match. Prize money is also paid to the greyhounds that run the fastest overall time in each race.
Prizemoney: $190,000
Speed Star, Speed Star 595, Speed Star Stayers – $50,000 (1st: $20,000, 2nd: $7500, 3rd: $2500 + $5000 to the winner of each match)
tab.com.au, Sky Racing – $20,000 (1st: $8000, 2nd: $3000, 3rd: $1000 + $2000 to the winner of each match)
Chance to win: There’s $20,000 up for grabs in our Top Dog Tipping competition! Click here for details on how you can be a winner!
For punters: There are more than 45 fixed odds markets available to punters across the night’s meeting! Markets include:
Head to head – Click here
Overall – Click here
Specials – Click here
Form guide:
Speed Star Special
GRV
Live results: Click here
Social Media:
Check out the behind the scenes action on Facebook, Twitter and Instagram and use the hashtag #SpeedStar

Sky Racing’s Jason Lincoln explains the Speed Star and how you can get on with tab.com.au

Sound smart to your friends:
– The is the seventh edition of the Speed Star
In the six previous main Speed Star (515m) events:
– 5 have led their match
– 5 have drawn outside
– 4 have trialled their way into the final field
In those 24 previous matches:
– 13 match winners have jumped from the outside, 11 from the inside
– 18 have led through the first split, six have come from behind
– 17 match winners have been the faster qualifier, seven the slower

– Format record: 29.006 (Smart Missile, series 1)
– Format split record: 5.01 (Allen Terminator, series 3)
– Closest margin: 0.001 seconds, Stirling Defence vs Myrniong Corner (series 5)
– Smart Missile is the only top seed to win the Speed Star (series 1)
– Smart Missile holds the format record of 29.006
– Of the nine females to have contested a Speed Star, four have won (Dyna Patty, Zara’s Entity, Outside Pass, Lamia Bale)
– No 7 or 8 seed has finished in the top three
– Blazin’ Bomber was the lowest seeded winner (6th)
– Only nine of forty runners improved on their qualifying time in the Speed Star, including all five series winners
– Allen Terminator has the slowest match win with 29.730