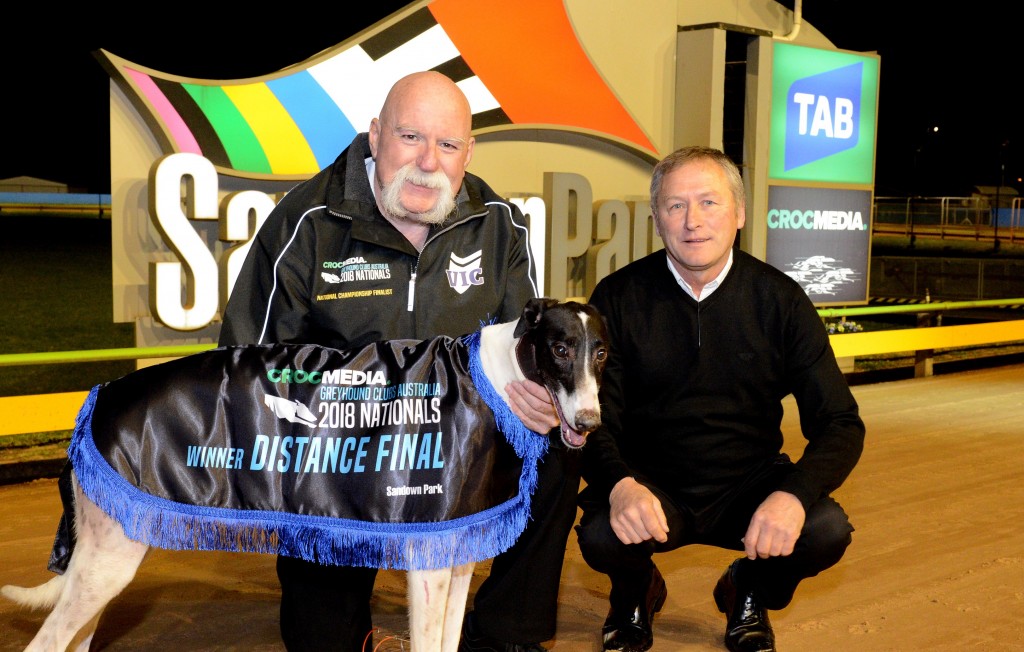 A heavily supported favourite, the greyhound affectionately known as ‘Batman’ was forced to work had to win his third group 1 title. He was beaten to the first turn by Dyna Chancer and put under pressure early by Rippin’ Sam, who defied his usual racing pattern to settle much further forward that usual. The three Victorians cleared out from the pack and were separated by just one length approaching the home turn.

As they turned for home, Tornado Tears showed the strength and determination that has made him such a popular chaser to gain the ascendancy and land the $75,000 winner’s cheque in a sick time of 41.45.

Britton, who won the National Distance Championship in 2017 with Fanta Bale, was both delighted and relieved with the victory.

“It’s really good, but it’s also a relief, because when you’re favourite for an event and they bring you up at a $1.50 there’s a bit of pressure on. But the dog doesn’t know that I guess, and he did the job,” Britton told GRV;’s Molly Haines after the race.

“You need a bit of luck in all greyhound racing, but that dog, he just seems to be able to pull it out at the right time.”

It was Tonando Tears’ sixth victory from as many starts over Sandown’s 715m trip over which he has four of the 10 fastest times ever recorded. He has now amassed $462,720 in prize money from just 26 starts and has stamped himself as one of the country’s most popular greyhounds.

Last night’s final was the 50th National Distance Championship and the 27th time a Victorian has claimed the title.

Later in the evening, Chris Halse (partner of the Robert Britton’s sister) claimed Western Australia’s first National Sprint Championship since 1997 when West On Augie defeated a star studded line up to claim the $75,000 first prize.

Victorian Sprint final winner Big Flood was all the rage as punters rushed to back him from $3 into $2.25, however it was West On Augie that best timed the start to lead through the first turn. The striking red fawn dog was pressured the entire journey by Hasten Slowly (trained by Robert Britton’s sister-in-law Angela Langton) but proved too strong in the run to the line, holding on by half a length in 29.43. The gallant South Australian Cairnlea Kenny finished third a length further back in a thrilling finish that saw the first fifth greyhounds over the line separated by just two lengths.

That good early speed was the key to the race, according to kennel representative the Linda Britton.

“I thought if he could jump he was a real show, but he had to jump and he’s probably been down on form just a little bit and so I was a little bit worried about that. But he’s certainly been in the good care of Robert and Mary (Britton) and he’s come out and done really well tonight.”

Not only did Britton have family members track side, a large support team also made the trek east to contest the Nationals decider.

“It really is about them being a part of it all. (Handler) Luke Townsend’s probably the most excited man on course tonight, and the Westons (owners). Chris will be sitting at home in the lounge room, grabbing the red wine or a champagne right now. It’s fantastic.”