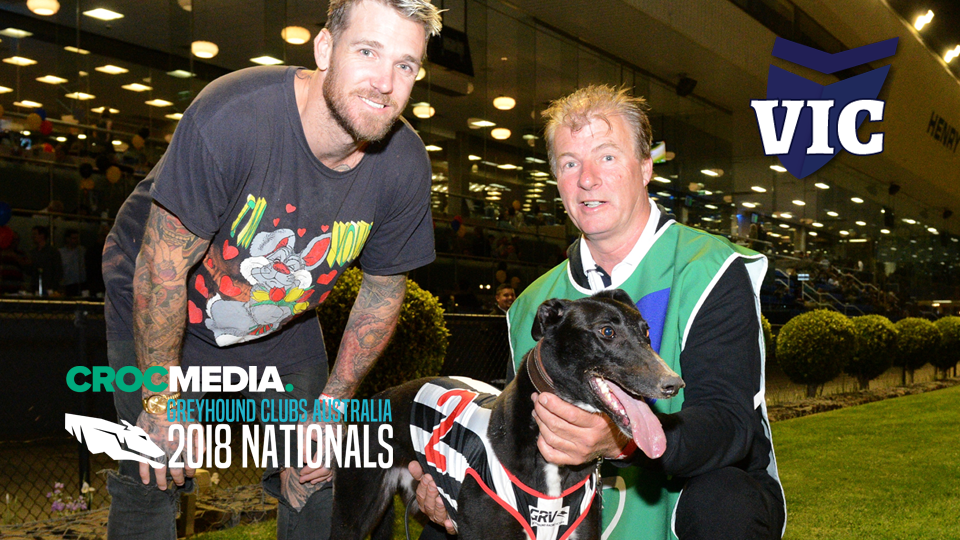 Up Hill Jill back for the Nationals


Up Hill Jill will make her long awaited return to the track in a heat of the Victorian leg of the Crocmedia National Sprint Championship at Sandown Park on Thursday night.

Up Hill Jill (pictured above with former Collingwood star Dane Swan and trainer David Geall) hasn’t raced since picking up an injury when finishing a gallant second to boom New South Wales chaser Miss Splendamiro in the group 3 Ladies Bracelet at Wentworth Park in May. Her recovery has taken longer than initially thought, but despite a limited preparation, her trainer David Geall is hopeful she can do enough to qualify for yet another feature final.

“She cracked a metatarsal bone in her right foot. It was a spiral crack which has taken a bit longer to heal and it’s been a slow process getting her back. She’s ready to go, but we would have liked 10 more days,” Geall said.

Up Hill Jill rounded out her preparations with a trial at The Meadows last Friday, and while the time she recorded wasn’t that impressive, Geall is hopeful that her trade mark early speed and will to win will carry her through to yet another feature final.

“She didn’t trial well but she’s never trialled well on her own. I can just see it even with her work here at home, she just wants to get out and race, she’s had enough of trialling.

“She’s a little bit underdone from having so much time off – I think it’s nearly 10 weeks since she’s raced – but we’ve got as fit as we could. We’re banking on her early pace and her big heart (to get her through Thursday night’s heat), but it’s going to be hard taking on the group dogs that are very race fit.”

Up Hill Jill will need to finish in the first two in her heat to reach the state final on Thursday 9 August. The first two in the Victorian final will progress to the $105,000 group 1 Crocmedia National Sprint final on Friday 24 August, though as the second highest ranked Greyhound Clubs Australia sprinter, the GCA Wildcard is also in play.

“Hopefully she can lead them early, but there’s going to be a lot of very good dogs sitting behind her so hopefully she can hang on and give herself a chance next week.”

One group 1 winning greyhound Up Hill Jill won’t have to contend with in the Crocmedia Nationals is kennelmate and younger half-brother My Redeemer who scored an impressive 34.13 victory on his middle distance debut at Sandown Park last Sunday. He will bypass the Nationals in favour of the Warragul St Leger and Cranbourne Puppy Classic, both series being age restricted and carrying a $25,000 first prize.

“Went super (yesterday). At first I thought we’re back on track and we’ll press on to the Nationals, but the more I thought about it and after speaking to one of the owners I changed my mind. He has copped a lot of knocks so far in his career, and at the Meadows (through the recent group 1 Maturity series) we just thought that he might have lost a bit of confidence.

“Because he’s young we can go for these age restricted races and keep his confidence up leading into the Speed Star. He’s going to have to be absolutely spot on for that.”

My Redeemer wins on his 595m debut