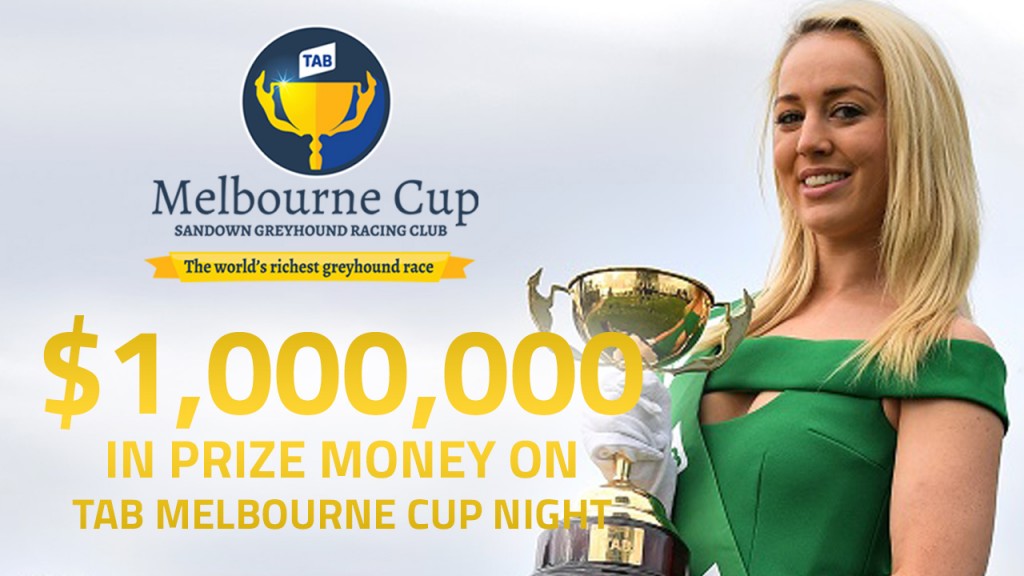 TAB Melbourne Cup night will carry $1m in prize money this November, making it the richest night of greyhound racing ever run in Australia.

As announced on Sky Racing’s The Catching Pen, there will be three new events added to the program and prize money increased for seven more – including taking the prize money for the TAB Melbourne Cup to a record $630,000.

Sandown Greyhound Racing Club Chairman Neil Brown said the club was excited to enhance the biggest night of racing in the sport.

“The TAB Melbourne Cup is greyhound racing’s flagship event – it’s the race that owners and trainers around the country want to win,” he said.

“The changes we’ve announced tonight not only consolidates the Cup’s standing as the world’s richest greyhound race, but makes TAB Melbourne Cup night a genuine showcase of our sport.”

New events to be added to TAB Melbourne Cup night include the Provincial Plate, the Super VICGREYS, and the Cup Night Stayers. As well as a prize money increase for the TAB Melbourne Cup, prize money for the group 1 Bold Trease and the Vic bred maiden series final have also been increased. In all, there will be eight feature finals on the card, and all four of the remaining graded races will have its prize money increased to a minimum of $10,000.

The Provincial Plate has been developed in conjunction with Greyhound Racing Victoria and will see two heats run at each of Cranbourne, Geelong, Traralgon and Bendigo. The winner of each heat will progress to the $35,500 final. The series is open to Victorian bred greyhounds with no city wins.

“Greyhound racing is a sport anyone can get involved in and the Provincial Plate gives more owners, trainers and clubs the opportunity to get involved in the sport’s biggest night of the year,” Brown continued.

“Greyhound Racing Victoria has done an excellent job in increasing returns to participants, and we’re excited to do our bit in highlighting the best our sport has to offer.

“I’d also like to acknowledge TAB for their ongoing support. Greyhound racing continues to grow in popularity, and we’re looking forward to working with TAB to further enhance how we present our feature events and introduce new people to the sport.”

The TAB Melbourne Cup will be run at Sandown Park on Friday 23 November.

There will be 8 feature finals on @tabcomau Melbourne Cup night - including three new races - and seven races have had had prize money increases.

Paw note: In November 2017, Greyhound Racing Victoria announced a $4m annual increase in prize money. There will be over $47m in prize money available in Victoria in the 2018/19 season.