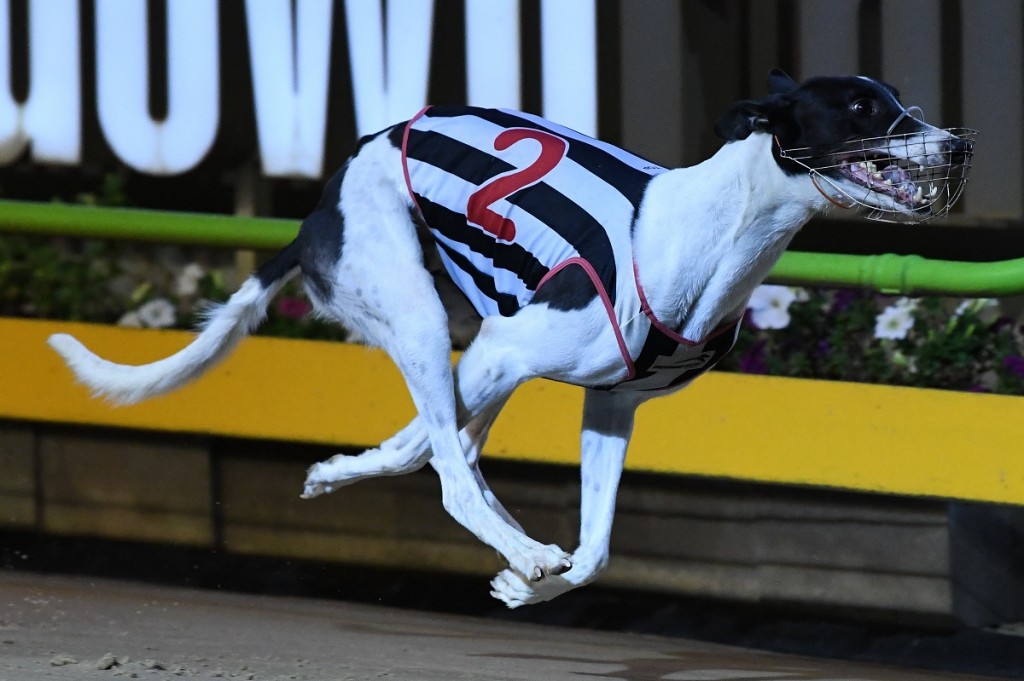 Tornado Tears showed why he is regarded one of the most exciting stayers of his generation with a dazzling display in a heat of the RSN Sandown Cup last night.

Tornado Tears entered the night as the $2.50 favourite to win the final of world’s richest race stayers and quickly showed why. In the most eagerly anticipated heat of the night billed as a two dog battle between litter mates Tornado Tears and Rippin’s Sam, Tornado Tears found the early lead and made the race his own.

Railing strongly to lead through the first turn, he quickly established a four length break with a lap to go. Known as ‘Batman’ due to his distinctive markings , Tornado Tears continued to increase his lead while carving out stunning sectionals before stopping the clock in 41.297 seconds – the fourth fastest time ever run over the trip.

“He’s almost the perfect stayer. Early speed, finishes it off – you can’t ask for any more. I reckon with the right conditions he might give the record a nudge,” said handler Peter Riley, six years to the day after champion Miata set the time standard of 41.17.

Rippin’ Sam, a group winner considered by many as the best stayer in the country, will also take his place in the $250,000 final next Thursday after charging home late to finish second nearly six lengths adrift.

“He made up a fair bit of ground, but when they’re running that quick in front – dogs don’t come from behind to run times like that.”

Remarkably, it was just Tornado Tears’ second start over the distance. His first came four weeks prior and went within a half a length of Miata’s long standing record and that run took the white and black chaser some time to recover. Given his limited preparation over the testing 715m journey, trainer Robert Britton was cautious about Tornado Tears’ prospects in next Thursday’s final – especially if he draws a wide box.

“I reckon the first two or three days after they get home you get an idea of how they recover. Some dogs do it easily, but other than Rippin’s Sam most of my dogs have been running over shorter distances. It’s a tough ask going over the distance with an unseasoned stayer, especially when they put in such gut busters each run,” he said.

“I don’t think he’s got the brilliance early (to settle near the lead if he does draw wide). His second and third sections are great, but I don’t think his first section is that great. There’s pace in the race with the likes of Dyna Chancer and Benali, I’d love to see him drawn inside of them.”

It was a memorable night for Britton who won three of the four RSN Sandown Cup hears. Quick Jagger and Benali also made their way through to $250,000 final after winning their respective heats giving Britton a four pronged attack on a second consecutive RSN Sandown Cup. Dyna Chancer was the other heat on his staying debut, stopping the clock in a smart 41.67.

While dominating the Sandown Cup heats, Britton also trained the fastest winner over the 515m with Not Available winning the first race of the night in 29.25 and securing a berth in the group 1 Harrison-Dawson. Exciting pup My Redeemer also took out a heat of the male greyhound only event, while Australian Cup quinella Hecton Bale and Hasten Slowly will join him after winning their respective heats.

The Sapphire Crown for female sprinters is run concurrently with the Harrison-Dawson, and will see Bill Collins Speed Star winner Dyna Patty joined by Elevated, the fastest greyhound at the track in 2018, as well as the other heat winners Go Seek Heidi and Come On Emmaline. Click here for a wrap

The box draw for all three group 1 finals will be conducted at 10am on Saturday 19 May live on RSN – Racing and Sport with the finals to be run on Thursday 24 May. Be on course for a chance to win over $100,000 in cash and prizes, meet AFL star Trent Cotchin and Majak Daw, and enjoy one of greatest night of racing for the year.

Click here for full results from a thrilling night of greyhound racing.

– It was a landmark night for former champion sprinter Fernando Bale, whose progeny won seven of the 12 group 1 heats run.
– Three of the four fastest times run over the 715m trip have been recorded in a heat of the RSN Sandown Cup. The RSN Sandown Cup race record is held by Sweet It Is in 41.489 – the 10th fastest time ever run

Honestly, Tornado Tears would have to overdose on Macca's ice-cream tonight to miss out next week! #toogood

$26 all in market #speechless

Tornado Tears blows away his opposition to win his RSN Sandown Cup heat in 41.30