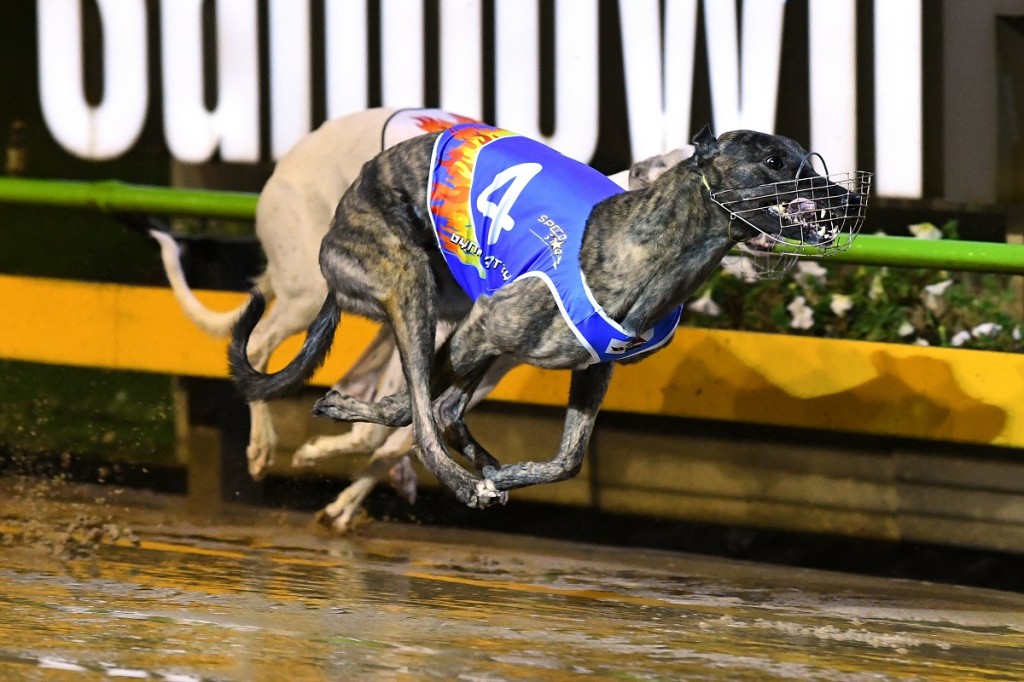 Drawn against series favourite Poke The Bear, Dyna Patty jumped on even terms and accelerated to the lead past the post the first time. Poke The Bear took advantage of its inside draw to retake the lead through the turn, however Dyna Patty powered down the back straight to again assume control into the final turn.

In a thrilling run to the line, Poke The Bear rallied along the rail but couldn’t catch Dyna Patty, stopping the clock at 29.411 and claiming the Bill Collins Speed Star crown. Connections picked up $20,000 for running the fastest time in the series, on top of the $5000 for winner her head to head match.

Robert Britton had a night to remember, claiming the night’s other two features with littermates Tornado Tears claiming the Racecallers (595m) and Rippin’s Sam the Lizrene (715m). The RSN Sandown Cup bound duo were brilliant in the wintry conditions, stopping the clock in 33.780 and 41.475 respectively. In fact, Britton trfectaed the Lizrene with Barcali and Back On Lava filling the minor placings.

He also claimed the night’s Britton also took out the night’s opening event with Not Available winning his second match race series and collecting $10,000, and when Slingshot Gypsy won a match in the final series it took Britton’s prize money tally for the evening to $95,500 – more than half of the $190,000 up for grabs across the night.

The Speed Star is a match race series bringing the fastest greyhounds in the country together for a series of two-dog head to head races. It’s the first week of a massive three weeks at Sandown Park, culminating in the group 1 triple header on Thursday 24 May featuring the Harrison-Dawson, Sapphire Crown and the world’s richest race for stayers, the $250,000 RSN Sandown Cup.

Click here for full results from the Speed Star.

Arriving home at 2:30am and back up at 6am is well worth it when you’re competing in an amazing series like the #SpeedStar. Inglis gave it his all but was gallant in defeat! A huge congratulations to @sandowndogs on such an amazing night and we were proud to be apart of it!

Well done to @sandowndogs for a terrific night of racing. Love the whole card of match racing and dedicated coverage on SKY2, hope this is the format going forward for the Speed Star. Great on track coverage from @Jayvdm91 @DaveCarlsonSKY well done to all involved

Tornado Tears… WOW!!! The Sandown Cup is going to be unreal. Can’t remember the last time two litter bros looked so dominant over the staying ranks at such an elite level?? #speedstar @sandowndogs @MickFloyd @DaveCarlsonSKY