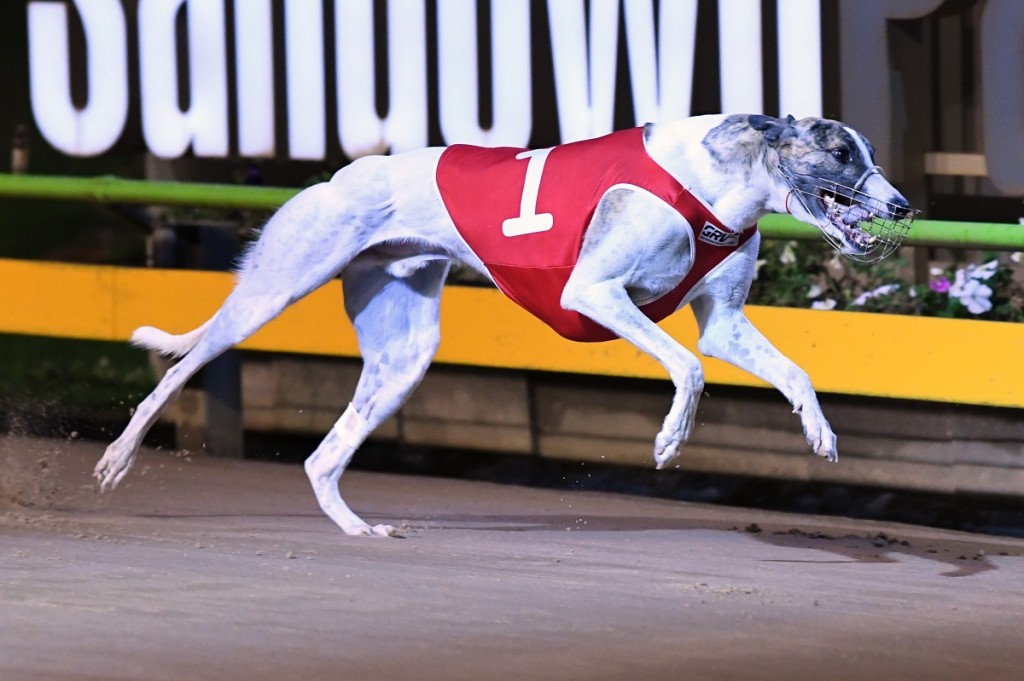 Robert Britton enjoyed a night to remember on Speed Star night and that domination looks set to continue through the RSN Sandown Cup.

Britton arrived at Sandown Park with nine runners contesting seven of the 20 two-dog match races and won all seven. He filled the trifecta in the group 3 Lizrene (715m) with Rippin’ Sam (pictured above), Barcali ad Back On Lava, won the group 3 Racecallers (595m) with Tornado Tears, took out the tab.com.au (515m) with Not Available running the fastest time of the night, and also won matches with Quick Jagger and Slingshot Gypsy. By the time the final match was run, he had pocketed $95,500 – more than half of the $190,000 in prize money available for the night.

“It was great, a real thrill. It one of those night where everything just went to plan so it was really good,” he said the morning after his monumental night.

Britton has been an advocate of the Speed Star concept since its inception and says that there should be more in the future, believing the match race concept is a vehicle to further grow the sport.

“I love it, I’d love to see it expanded,” he continued.

“Racing needs something that’s new and exciting and this the thing that can really launch it. I like the fact that people like me who are just occasional punters can have a look at all the different markets and see something I like. We’ve got some wonderful events, but they don’t capture the punter’s imagination as much as it should, but this one does.”

The Speed Star is the first night of a massive three weeks of feature racing at Sandown Park, culminating in the world’s richest staying race, the $250,000 group 1 RSN Sandown Cup. Britton won the race in 2017 with retired champion Fanta Bale and looks well placed to secure a victory in this year’s edition with as many as seven runners set to contest the series.

As well as the Lizrene placegetters, Britton plans to enter Bolt Like Bekim, Quick Jagger and Tornado Tears, while a decision on whether to step Benali up to the 715m distance or back to 515m will be made over the weekend. Interestingly, despite Rippin’ Sam’s brilliant Lizrene victory in 41.475 – the 8th fastest time ever recorded over the distance – Tornado Tears firmed into RSN Sandown Cup favouritism with tab.com.au and has been the best supported runner in the market since it opened. Tornado Tears recently ran within 0.034 seconds, or half a length, outside of Miata’s long standing track record of 41.170 at his only attempt at the distance.

Tornado Tears’ 33.780 victory in the Racecallers was the fourth fastest time ever run over the trip, and was all the more meritorious given the cold and wet conditions.

“He’s a very exciting pup from a very good litter. It’s one of those years, sometimes you don’t have any stayers at all, but I’ve been lucky to have a few good stayers the last few years.”

Fields for the RSN Sandown Cup heats will be released Monday 14 May along with the heats for the group 1 Harrison-Dawson and Sapphire Crown. The finals of all three group 1 races will be run on Thursday 24 May.