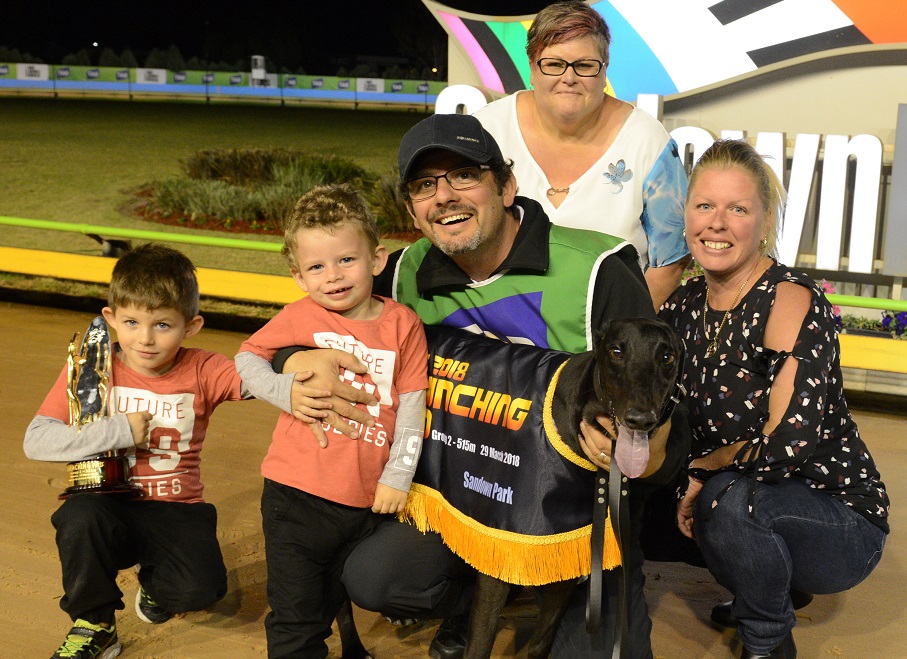 
Beast Unleashed showed why he is regarded as one of the country’s most exciting chasers with a brilliant all of the way victory in the $210,000 group 2 Launching Pad at Sandown Park last night.

Taking full advantage of his rails draw, Beast Unleased led narrowly through the first turn before unleashing his trademark mid-race pace to open a three-length margin down the back straight. The move would prove pivotal, Chief’s Sidekick began to improve off the back straight and cut the margin to less than a length in the run to the line. However the $2.70 favourite prevailed, stopping the clock in a series best 29.34 and remain undefeated throughout the series.

“I’m lost for words,” said Peter Lagogiane, who trains the greyhound in partnership with his wife, Jodie.

“A big thank you to the dog. He’s the one that does it all, us trainers we just feed him, train him, and make sure they’re sound and that’s it. He’s the one with the motor, we just fine-tuned it.

“I’m tickled pink for my family, and for the owner Dawn Garrett.”

Lagogiane began preparations for the $410,000 sweepstakes series after a number of impressive performances in his home state of New South Wales. A plan was put in place to ensure the dog was given every opportunity for success in the series, one of the richest greyhound racing in the country.

“I looked at this race many months ago. I had to make sure that he was going to get to the 500m, and after he put some brilliant trials back in New South Wales that was the end of it, I knew it was going to happen.

“We’ve been up and down for about seven weeks now, but we have stayed here the last three weeks. (Melbourne Cup winning trainer) Jason Mackay gave me some advice, he said if I want to win this, you’ve got to stay here you don’t travel up and down. He said ‘how do you feel after travelling that much, imagine how the dog feels,’ so a big thank to Jason for giving me that advice.

“And a big thank you too to Anthony Azzopardi and his family for putting us up. When he saw the dog trial he said he can win this.”

Lagogiane has spent a considerable amount of time away from his young family during the season and was delighted to celebrate the victory with them, as well as Beast Unleashed’s owner Dawn Garrett, track side.

“It’s the first time I’ve actually been away from my family for this long. They flew down for the occasion, my wife pre-booked last week before the semis. She said, ‘don’t worry, the dog will just win.’ I said, ‘that’s a mock.’

“It’s the first time I’ve actually been away from my family for this long. I hope I can learn from it, get a bit better and go on to bigger and better things.”

Beast Unleashed, who doesn’t turn two until 3 April, has now won seven of his eight career starts and has already amassed over $177,000 in prize money. It was the biggest win of Lagogiane’s career, and while is rising star has the greyhound racing world at his feet, his next assignment is unclear.

Earlier in the night, Jimmy Newob continued his outstanding form with a determined victory in a thrilling edition of the $36,000 group 3 Easter Gift, holding out Extreme Magic by the barest possible margin.

It was the popular blue dog’s second success at group level in as many starts following his recent group 2 Horsham Cup success.