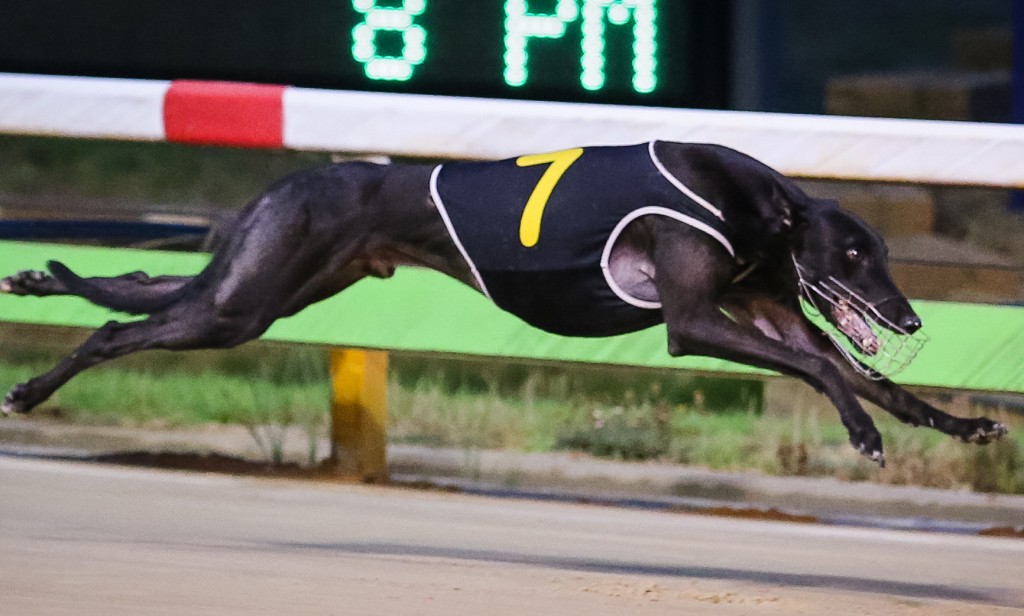 South Australian greyhound fans will be cheering on two of their most promising youngsters when the $410,000 Launching Pad series kicks off at Sandown Park tomorrow night.

Petar Jovanovic trained Cairnlea Strider and Cairnlea Jet (pictured above) are engaged in heats three and four respectively. Cairnlea Jet won his way through to the $410,000 series by claiming a Launching Pad qualifier final earlier this month at Angle Park.

“I was happy with the run, he’s shown his ability. Every trial, every run I’ve given him he seems to be maturing. I don’t know where the limit is. He’s in great form at the moment and he’s just getting better,” said Jovanovic.

Jovanovic stepped Cairnlea Jet up to 600m mid-February where he won by eight lengths. He has since dropped back to 515m stringing together back-to-back wins at Angle Park.

“He doesn’t have to lead, he can come from behind. Trial wise, compared to race wise we haven’t seen the best of him.”

Kennelmate Cairnlea Strider enters the series with 18 starts and six wins under his belt with the last of those an impressive five length win 29.77 win at Angle Park.

“They’re different types of dogs but both are pretty quick. Strider has more early pace.”

Jovanovic’s Launching Pad plan relied on Cairnlea Jet winning his way through, once he did it was then he purchased a secondary ticket for Strider.

“I just gave him one run, I was hoping Jet got through, which he did, and then we said well, we’ll pay up for Strider because on ability there’s nothing much between them.”

Both greyhounds are owned and bred by Jan Hubbard and her late husband Peter.

“Peter had set up a property and then he passed away suddenly back in November 2016.

“He had rang me over the years asking me to train some dogs for him, at those times I had a full kennel, I couldn’t take any and I think one of them was Cairnlea Layla (mother of Cairnlea Strider). After she finished racing he still persisted. He was best mates with Ken Hinkley, Port Adelaide’s coach.

“Kenny is tied up with the family. He’s passionate about the dogs.”

Jovanovic has bounced to and from South Australia and Victoria over the years and says “there’s always a possibility” of him and his partner Lesley returning.

“I’ve always travelled to Melbourne all my life to race over there, I’ve had stints and come back home to my farm here at Lewiston. When I met Lesley back in the early 90s, we decided to make a move and set up base in Melbourne. We were going to buy a farm but we didn’t get around to it, we ended up buying a house.

“We were there for about 10 years and then Lesley’s mum and dad became unwell. So, the decision was made to go back home to look after them.”

Jovanovic is no stranger to success at Sandown Park having won the 1991 Melbourne Cup with Fox Hunt, he also won the 1985 National Sprint Championship at the track with Scenic Spa.

The three-week Launching Pad series is open to greyhounds with 1-6 wins and no more than 30 starts. It’s Australia’s only sweepstakes event, it series boasts $410,000 in prize money with $150,000 going to the winner of the group 2 final on Thursday March 29.

Cairnlea Jet (7) wins his way into the Launching Pad