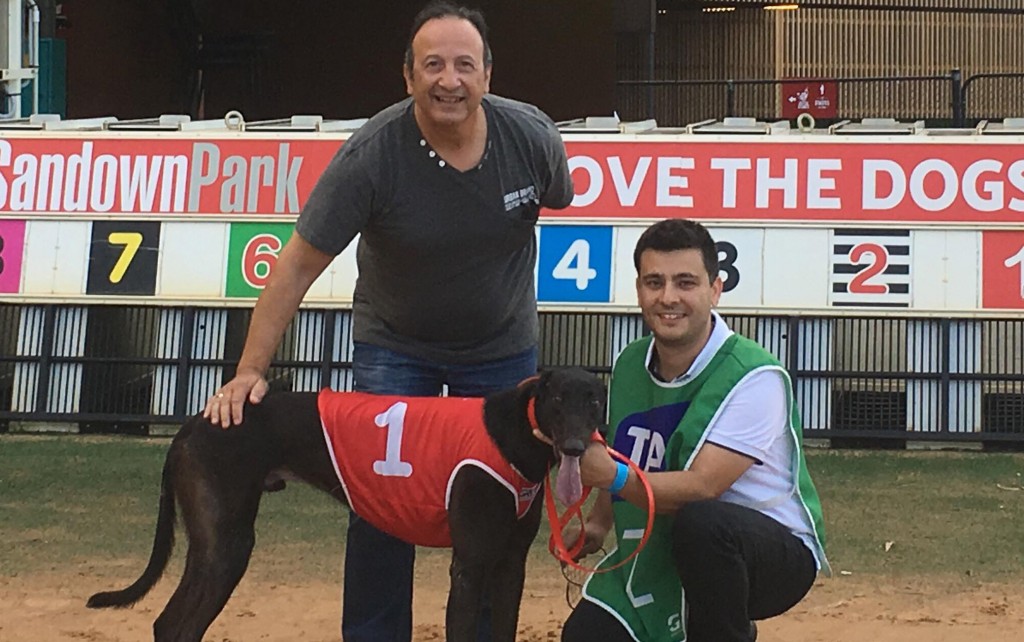 Andrew Xerri’s new found passion for greyhound racing has been rewarded after he scored his first city win on Thursday night at Sandown Park.

Bera Na Liva, who Xerri co-trains with his father Joe, began well from box 1 and led down the back straight. He then held off a late charge from Give Me Wings in a thrilling finish to win by a nose in 29.90.

Xerri said he was proud of the win and very happy with Bera Na Liva since moving to his kennel from New South Wales in August.

“We are super proud of the win and also very proud of this greyhound, he has impressed us so much since coming to Victoria,” said Xerri.

“Whenever he draws box 1, 2 or 3 we know we are in for a good chance, he loves to rail and will do whatever it takes. Once he led on the first turn and took off down the back I was saying to myself ‘I think he is going to get run down here’, but he found another gear on the home turn.

“It was even more special that my dad was there on track with me to experience the win and watch Bera Na Liva (Quicker Than Lightning in Fijian) get up in the last bound.”

Moments after the race congratulatory messages came flooding in for the Xerri team on all forms of social media.

Xerri, 30, has only been training greyhounds for two years but spent a long time prior helping out his dad at home.

“My dad started training greyhounds about 15 years ago, I fell in love with them as they are lovely animals with a great nature. I was always helping dad and I thank him for everything I know.

“He currently lives with me and has a few dogs in his name from time to time just to keep him involved. He’s always helping me out in the shed or at the tracks giving me advice.

“I started training myself officially about 2 years ago. I have a huge passion for it. I’ve done a lot of research into health, injuries, feed and training regimes. I’ve listened to different trainers, owners and even breeders – I thank all of them too.”

Xerri hopes the year ahead can be just as good or better than the last.

In case you missed it we celebrated our first metropolitan winner @sandowndogs last night with Bera Na Liva ‘faster than lightning’ in 29.90 @GRV_News @lidpingers https://t.co/a9w2MpmID5