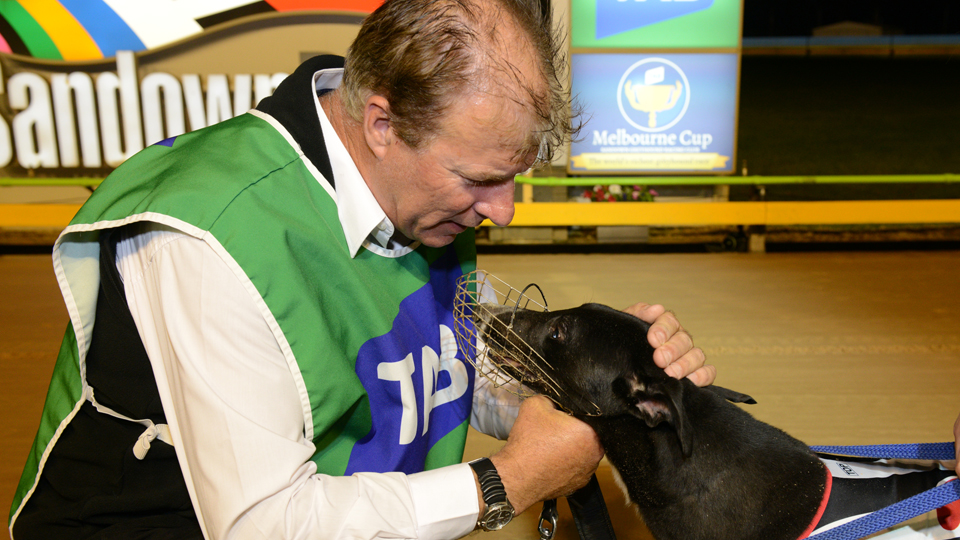 Up To The Cup

She mightn’t be the fastest greyhound he’s ever trained, but there’s no doubting who David Geall believes is the best chaser he’s ever put a collar and lead on.

Up Hill Jill, the well supported $8 chance in Friday night’s TAB Melbourne Cup proved again she’s one of the country’s fastest – and toughest – sprinters in the land when crossing, then holding off defending Cup champion Ando’s Mac to seal her berth in the final.

Geall and his wife Rose bred Up Hill Jill, a member of a litter of eight pups all of which won multiple races. However, Jill gave no indication early in her preparation that she’d go on to become one of the country’s best performed sprinters.

“Jill didn’t break in very well, she was the second slowest of the litter,” said Geall.

“She started doing her pre-race program which is about eight trials, and during those trials we never really saw anything at all.

“Then she came out in a race and something just changed. I believe it was the full field, the competitive streak that sub sequentially she’s had since.”

From 53 career starts, Up Hill Jill has missed a place on just five occasions, winning 28 and amassing $457,696 in prize money. Amazingly, after winning the group 2 Laurels in December 2016, Up Hill Jill ran second in six of her next seven group finals before breaking through in the recent group 1 Topgun at The Meadows giving Geall his first group 1 success. On Friday night, she’ll attempt to become the fourth greyhound in history to complete the Topgun-Melbourne Cup double, following in the footsteps of Hall of Fame chasers Rapid Journey, Bombastic Shiraz and El Grand Senor.

Blessed with tremendous early speed, Up Hill Jill’s average first split time at Sandown park is 5.038 seconds. By comparison, Fernando Bale – widely regarded the greatest greyhound of all time – averaged 4.996 to the first mark. And while her early pace is a major asset, Geall maintains her biggest strength is her uncanny competitiveness and will to win.

“She has, fierce, fierce determination. I’ve likened it to a dog like Bombastic Shiraz who was a super star, just the way he competed. It doesn’t matter, by hook or by crook she’s going to try and get past that leader, whether she’s copped a bump or whatever has happened.”

The enormity of reaching the final of the world’s richest greyhound race was not lost on modest Lara mentor who is soaking up all that comes with competing on the sport’s biggest stage.

“I felt a massive thrill straight after the race, that we’ve made a Melbourne Cup. it’s a massive, to win the Melbourne Cup would be the ultimate achievement. I think from then on  everything else we do in greyhound racing would be icing on the cake.

“I’d just be content in my greyhound life, but don’t worry if we won it I’d be back trying again with another dog!”

Paw note: Up Hill Jill will meet Striker Light for the ninth time on the track this Friday night. The ledger between the two currently stands at four apiece.

Up To The Cup: David Geall and his champion Up Hill Jill