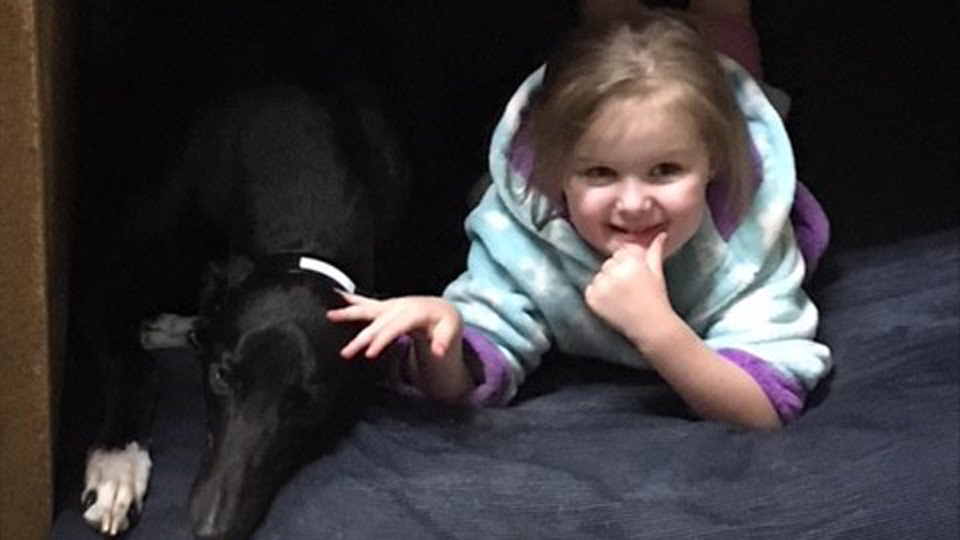 Being the daughter of one of the most successful trainers in the country, Sophie Thompson has grown up around some of the sport’s fastest chasers.

Spending her days helping mum in the kennels or simply talking to the dogs, she has formed many close bonds with a number of greyhounds. But her relationship with star chaser Big Flood is truly special. And unique.

‘Morris’ as he’s known in his Pearcedale kennel enters Friday night’s TAB Melbourne Cup heats as the $12 second favourite after recording seven consecutive victories. Not that it matters to his best friend who win, lose or draw, is waiting to greet him each morning.

“When the dogs are out of the kennel, she’ll quite often jump in their beds,” explained her mother, Seona Thompson, who has seven greyhounds in tonight’s TAB Melbourne Cup heats.

“One day a couple of months ago she hoped in Morris’s bed and wanted him to go in with her. We let him in and he just hoped in the bed and laid down next to her. So now it’s become a ritual that each day she goes in Morris’s kennel.”

Since then the two have become inseparable, to the point where Sophie has assumed handling duties around the kennels.

“When I put the dogs out in the evening Sophie comes out and helps me. I put them out two at a time and Big Flood goes out with Invictus Rapid. They’re out there for 5 or 10 minutes then come back to the gate when they’re ready to come back in.

“I’ll take Invictus Rapid inside but when I call Big Flood he won’t come. He’s worked out that Sophie will come and get him, so he’ll walk all the way down to the bottom of the paddock and just stands there waiting for Sophie to get down there, then she’ll call ‘come on Morris’ and they’ll walk back together, talking to each other all the way back to the kennels. She doesn’t need to hold his collar or anything, he just follows along beside her.

“There’s a special bond between them, I love seeing them together. She thinks the world of him and clearly he does of her. It’s just really, really sweet.”

Bursting on to the racing scene 12 months ago, Big Flood won his first five starts and nine of his first 10 including a brilliant win in the listed Australia Sprint at Sandown Park in a stunning 29.18. After running third in the group 1 Golden Easter Egg at Wentworth Park, he ran fourth in a heat of the Warrnambool Cup where he suffered a hock injury, forcing him to spend the next four months on the sidelines.

He returned at Sale in late August and with an impressive win in the best time of the night and hasn’t been defeated since. However an incident in the catching pen after his eye catching victory in the Geelong Derby almost derailed his Melbourne Cup hopes.

“He was very sore after that Geelong run. We had to scratch from a race at Horsham that he really needed ahead of the Preludes, but we had him vetted and he recovered really well.

Despite the compromised preparation, Big Flood won his Prelude to make it seven wins from seven starts at Sandown Park and qualified for Friday night’s TAB Melbourne Cup heats. Now, the pressure is really on his trainer ahead of one of the biggest races of his career.

“I don’t think I’ll be allowed to come home if he doesn’t win, I might be looking for somewhere else to live!

“He’s been very well trained by a four year old this week. For Sophie’s benefit I hope he makes the final because I promised she could come to final night if he does. There’ll be a little four year old in front of the telly cheering on Morris.”

Sophie Thompson cheers on her best mate, Big Flood (Morris) to victory in the Geelong Derby

Big Flood is one of seven TAB Melbourne Cup contenders for Seona Thompson. Here are her thoughts on her other runners (TAB All-In market in brackets)

Race 3: Despacito ($26) – Very, very happy with the way the dog is going and where he is drawn
Race 4: Bewildering ($9EF) – Loves to be in the center of the track, but we’ll know at box rise with him. Hopefully he can get the start right
Race 5: Petadale ($51) – I thought he was sensational given he was in the last race last week and he does get a little wound up in the kennels. He hasn’t been having a lot of luck in his races but was really impressed with his run last week
Race 7: Aston Dee Bee ($9EF) – Absolutely jumping out of his skin. I’ll probably be heartbroken if he doesn’t make the final. He can go quicker than he did last week, really He’s racing really, really well and I’m really happy with him going into Friday
Race 8: Invictus Rapid ($101) – Ran a really good race last week. He’s getting older and it’s getting a bit tougher for him but he’s a dog you can never rule out, I’m hoping he can run an honest race.

Race 11: Extreme Magic ($51) – Rapt to get a run, would have preferred him to draw inside but just glad to have him in there