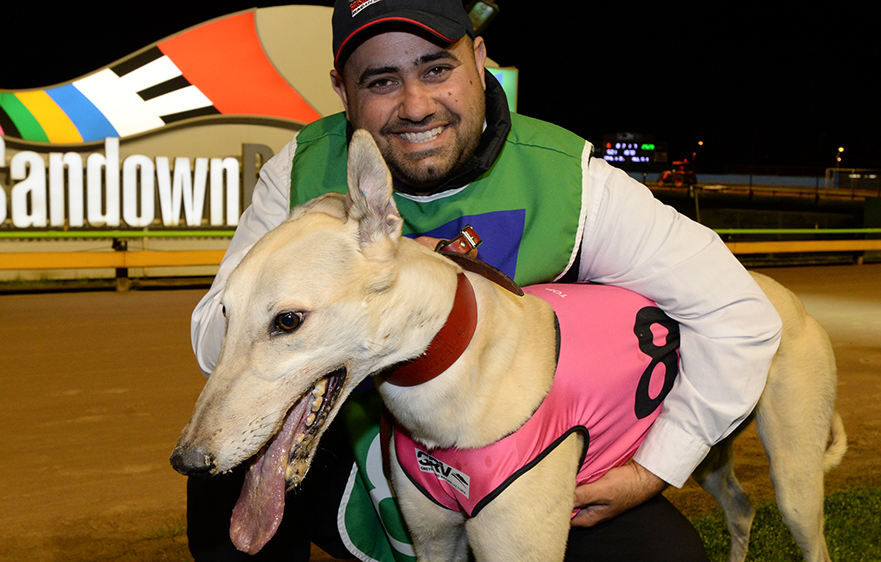 He began well from box 8 and muscled past his rivals to lead at the first turn. Just like last year’s Cup final he found himself in front with clear air behind him down the back straight. He held off Blue Gum Hill to win by 1¾ lengths in fast time of 29.29, a new personal best and fastest of the night.

His trainer Anthony Azzopardi was proud post race and is confident the 3-year-old is getting better with age.

“The older he’s getting the better he’s racing. His trials have been sensational, I can’t fault him he’s going really well at the moment,” said Azzopardi.

Greyhounds who win a Prelude or an exemption race gain automatic entry into TAB Melbourne Cup heats. Having won last year’s edition of the world’s richest greyhound race, Ando’s Mac was already exempt into this year’s heats, however Azzopardi believed a run at open level would be beneficial.

“With the Cup Preludes on it’s unlikely there’s going to be a race for him given what grade he is, so we thought we might as well nominate him for them. I like to keep him racing in good company to keep him at the top of his game.”

Ando’s Mac, or ‘Max the destroyer’ as he’s known to Azzopardi’s daughter Kaylah, will now hope to gain a berth in The Meadows’ group 1 Topgun later this month. A panel will meet this Sunday to decide which greyhounds will gain a start in the invitational only event.

“The Topgun will be his next assignment, pending he gets a run. It’s going to be hard as there’s so many great dogs around, but I reckon he deserves a spot in the race.”

Following that Ando’s Mac will be placed in cotton wool in preparation for a tilt at back-to-back TAB Melbourne Cups.

“After that we’ll have him rest for a while to prepare for the Melbourne Cup.”

The second Prelude of the night was won by Yarraman Ace who narrowly deafeated Chasin’ Crackers in 29.44.

Last night’s Prelude Series was the second of four in the lead up to Cup heats. Series 3 will be held on Thursday October 27.

Heats of the $600,000 TAB Melbourne Cup will be run Friday November 17 with the final to be held the following Friday. For more information head to superdogs.com.au