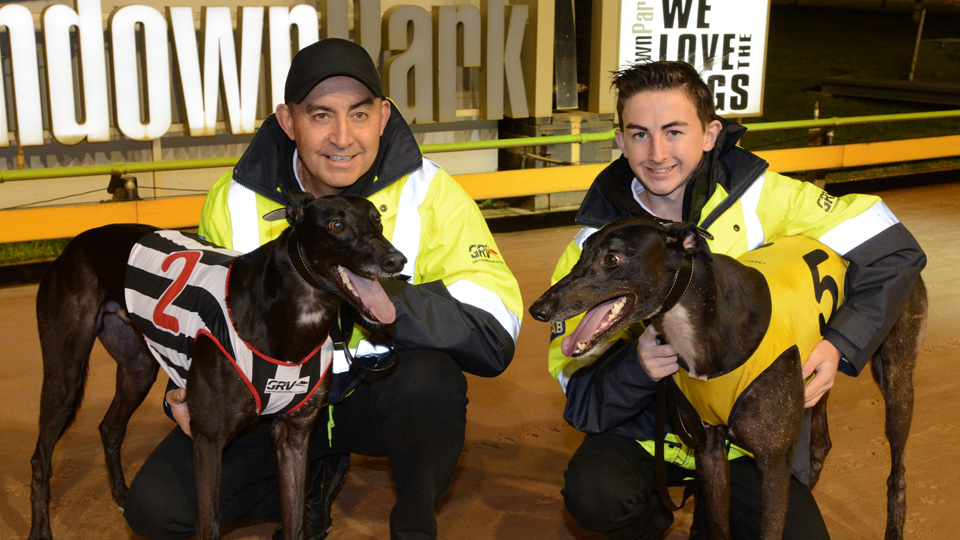 
Seona Thompson made a clean sweep of the Victoria leg of the National Championships after Aston Dee Bee and Bewlidering brilliantly quinellaed the state final at Sandown Park tonight.

Beginning well from box two, Aston Dee Bee railed powerfully beneath early leader and kennel mate Extreme Magic to lead out of the straight the first time. He held off the well supported favourite Black Mumbo down the back straight, then survived a late challenge from Bewlidering to score by 1.75 lengths in 29.172 – the second fastest time recorded in 2017.

It was Aston Dee Bee’s third consecutive win and a welcome return to his brilliant best.

“He’s been threatening to do this for a while,” said handler Jason Thompson.

“He hadn’t been here for a while before last week. He got another good draw tonight and he made full use of the inside draw by pushing up beneath Extreme Magic, it was good to see him do everything right and still be strong at the end.

“He didn’t ping the lids but he mustered hard and pushed through like a good dog. He probably hasn’t shown that tenacity for a long while but he has been threatening to do it. He went really well.”

Aston Dee Bee will be joined in the National Sprint final by Bewildering, who reached the final as the AGRA wildcard by virtue of being the highest ranked greyhound to make its state final without winning it.

The run by Bewildering was simply brilliant. A clear last after box rise, the Bill Collins Speed Star winner threaded a path through the field at the first turn to emerge in third place entering the back straight. With clear galloping room he unleashed his customary powerful finish to run second. His time in running second would have won any other race on the night by two lengths.

“The winner has run home in 10.52 and I reckon he was probably six or seven off him and he’s been beaten a length and three quarters,” Thompson continued.

“He’s hit the line hard but that’s what he does. Box 5 was a little bit tricky for him but he went really well.”

The Thompsons have won just about every major race on the greyhound racing calendar, but remarkably have never had a finalist in the National Championships. Not only will they have two finalists in the Sprint final at Albion Park, but they will also have a runner in the National Distance Championship final with Burn One Down also set to fly the Victorian flag.

“It’s good, any of these sort of races it’s just great to be in them and be involved and to make the final is a great achievement by the dogs.”

The National Championship grand finals will be run at Albion Park, Brisbane, on Friday 25 August.