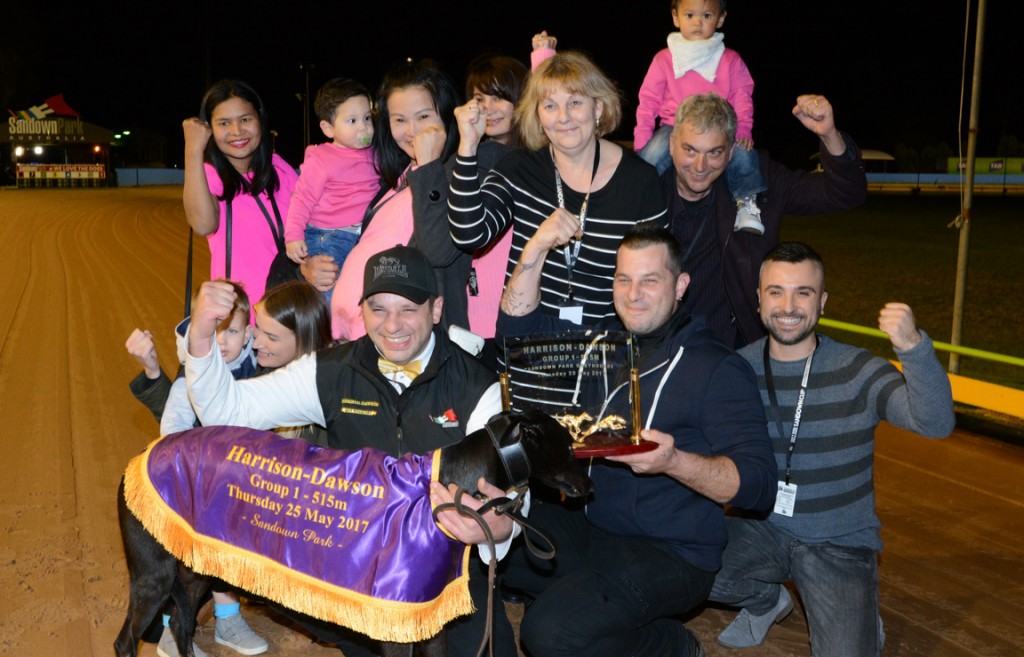 
Black Mumbo provided the Karabitsakos family with their biggest moment in greyhound racing last night when he took out the $145,000 Group 1 Harrison-Dawson.

“Best feeling ever. Ever. I can’t explain how I feel.” said an emotional Anthony Karabitsakos post-race.

Black Mumbo began well as short priced favourite Bewildering stumbled as the lids rose. Black Mumbo was locked in a three way battle down the back straight with Jimmy Newob and Bubble Guppy. As they turned for home Black Mumbo maneuvered under Jimmy Newob and finished the better to win by 1¼ lengths in 29.53.

“I just hoped he stayed safe around the first corner. Once he settled up front I knew he was going to be hard to beat.”

Black Mumbo returned to the race track in April following three months on the sideline. He battled a tonsil issue that was only discovered after a change of vet.

“We’ve had problems with his tonsils. He’d run two good races and then get sick. After a change of vet he found there was a problem. Thank god for Alistair (at Sandown Veterinary Clinic), he’s done an unbelievable job.”

Karabitsakos dedicated the win to his late father who passed away four years ago. Following the passing Karabitsakos bred his first litter, caring for and educating the pups with all the knowledge his dad passed down.

“My Dad had dogs since he was young. I grew up always with dogs around, I helped Dad with trialing and all the things that go along with having dogs. I got my trainer’s license but was still only helping Dad part time. He passed away four years ago. After that I bred my own litter for the first time – I put all the work he taught me over the years together.

“Having done all the work myself, it’s much more special. Dad would be so proud.”

Karabitsakos was very thankful of his mum Vicki and brother Luckie for their help and expertise.

“Mum’s great and my brother is always there for me. Without my brother, this wouldn’t of happened. He’s taught me a lot of the past few weeks.”

Later in the night Fanta Bale made history in the RSN Sandown Cup, becoming the first greyhound ever to win a Group 1 over all three metropolitan distances. Between the two Maja Mahi Mahi gave Ash Terry her biggest thrill in the sport.