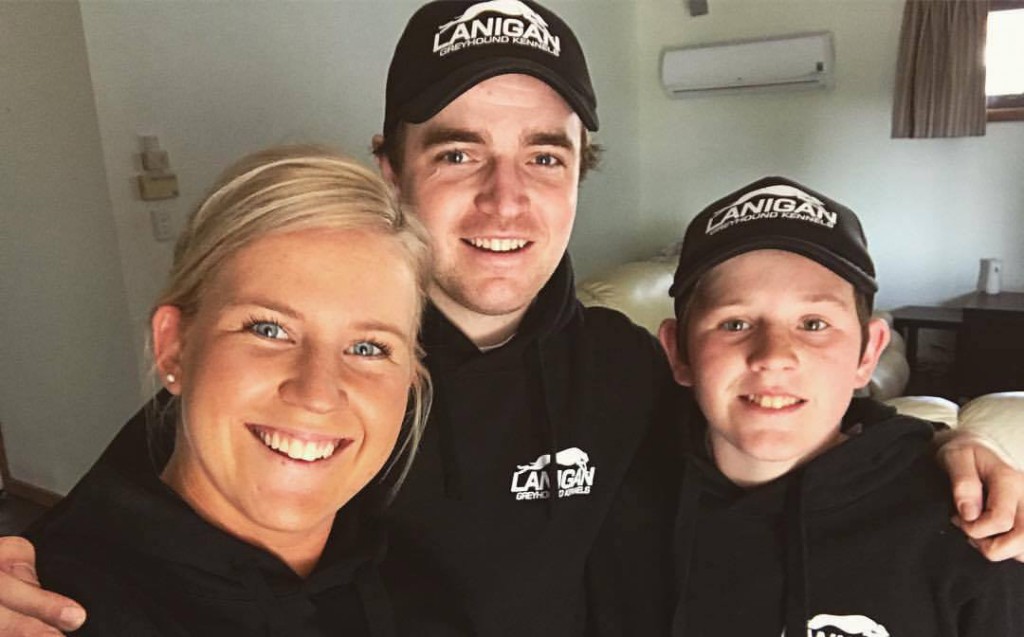 
It’s a 10 hour round trip from Swan Hill to Sandown but it’s worth the while for young trainer Matt Lanigan as he prepares Zipping Hooch for a semi-final of the $400,000 group 2 Launching Pad on Thursday night.

After running an impressive second in his heat, Zipping Hooch is rated a $10 chance to win his semifinal after drawing well in box 2.

“He was so close turning for home I thought he was a genuine winning chance given how strong he is. I looked up at the board and saw he was beaten a head, I was a little disappointed but content given the time they ran,” said Lanigan.

Zipping Hooch’s path to the Launching Pad, a sweepstakes event restricted to greyhounds with 1-6 wins, is an unusual one. After starting his career in New South Wales, Zipping Hooch won on his debut for Lanigan but following a string of minor placings, was sent to friends in Tasmania to continue his career.

“We sent him to our friends Ian and Eileen Thomas. We were having a little bit of trouble with him as he’s a bit immature – we thought he’d benefit from a move to Tasmania.”

In five starts in the Apple Isle, Zipping Hooch won twice and ran second on three other occasions, earning him a tilt at one of the country’s richest series.

“He went well over there, he didn’t run any worse than 2nd. When we told Ian and Eileen that we wanted him back to compete in the Launching Pad series, they were a little hesitant as they love having him and he was going well but we said no matter the result is he’ll be going back to you guys.”

Despite only being a new comer to the training ranks, the 24-year-old has already tasted success at group level with Zipping Bruiser taking out the country’s longest running group race, the Hobart Thousand. Despite Zipping Bruiser’s success at the highest level of the sport, Lanigan believes that Zipping Hooch has more ability than his group 1 winning litter mate.

“It sounds strange but he’s got the most ability out of the whole litter. His trial times are incredible but I think he’s only just starting to learn what racing’s all about.”

Lanigan’s connection with greyhounds began in his early childhood, but moving to the state’s far north and away from the tracks saw his involvement diminish. That all changed following a life changing knee injury.

“Dad’s always had greyhounds, there’s photos at home of me as a youngster with them. When we moved to Swan Hill my interest deteriorated a little due to not been near a racetrack.

“When I was 17, I went to England to play cricket but was forced to come home for a knee reconstruction. Following that, Dad and I thought we’d buy a greyhound together. Since then it’s quickly escalated, my girlfriend and I have our own property with four greyhounds here that we train.

“I can’t think what my life would be like without them. I’ve had battles with depression and being able to go to the track and have dogs at home has helped immensely.”

“When I first met her she wasn’t a fan of dogs of any kind. She didn’t like dog hair and didn’t enjoy them coming up to her. Now, she talks about getting a bigger property with more dogs.

“Even her family have bought a share in a greyhound with us. She’s a massive help at home, I wouldn’t survive without her here. When Dad and I go to the track she stays home and looks after them. Between her, Dad and I we make a really good team – the dogs love what they do and we treat them like kids.”

Swan Hill is some distance from the nearest race track, and being one of few trainers in the region, Lanigan has built a significant following through their use of social media. Lanigan Kennels has Facebook group of 700 members, a Twitter account with 250 followers, and even boasts its own line of merchandise.

“Dad went to Wentworth Park on Saturday night and a friend of mine Jack Mitchell was there – the only way Dad recognised Jack was because of his Lanigan Kennels shirt.

“Living in Swan Hill there isn’t many greyhound trainers around so people get excited when we have success. Strangers have stopped me in the street and the local newspaper have done some work with us. Everyone wants to know how the dogs are going and when they’re running next.”

For the time being, Lanigan juggles training greyhounds with his full-time job at Telstra, but does have plans to one day train full time and has struck up friendships with some of the best operators in the business.

“I’ve become really good mates with Camo Hallinan, just through Facebook. Jason Mackay has played a big part too, he’s always been there if I’ve needed advice. I’m pretty lucky, my boss is involved with horse racing so he understands how important the dogs are to me.

“My goal is to train full time but it would mean a move to Melbourne. For example, living in Swan Hill we got home at 4am last Thursday, I was up at 6am to look after the dogs then off to work by 8am.

“To be the next Jason Mackay or Anthony Azzopardi would be a dream come true.”

Lanigan hopes the kennel’s next achievement will be to have a Launching Pad finalist. Zipping Hooch will need to finish top two in his semi-final to cement a spot in the final and compete for the $150,000 first prize.

“At the end of our five hour trip home I reckon I knew the form of every dog in his semi. If he begins better than he did last week he’s got a chance. Mepunga Blazer will be hard to beat, he’s one of the best young dog’s in Australia. I will have my fingers and toes crossed.”