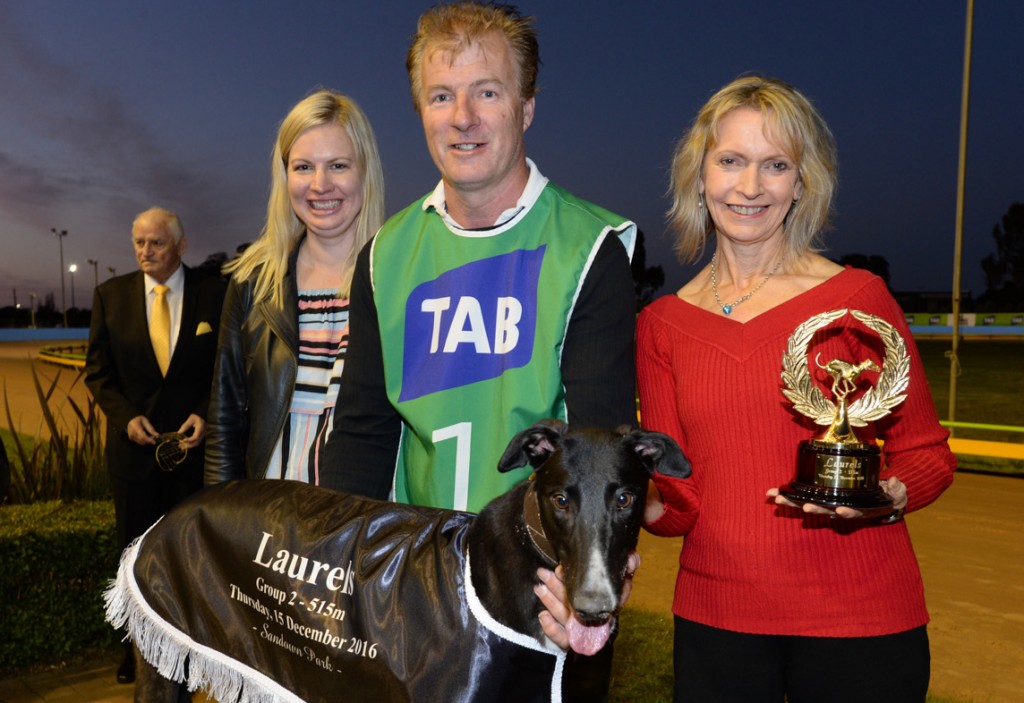 
Up Hill Jill delivered her connections their biggest thrill in greyhound racing when she took out last night’s $72,500 Group 2 Laurels final.

Up Hill Jill speared out of the inside alley as fancied runners Fanta Bale and Striker Light found trouble. Up Hill Jill led clearly down the back straight and was unchallenged in the run to the line, defeating Fearless Swan by eight lengths in 29.55.

There was no hiding of emotions from trainer David Geall post-race.

“I’m over the moon. The Laurels is a very prestigious race with a lot of history,” said Geall.

“We were quietly confident after she drew box 1. She’s got great early pace and the box was going to give her every chance to win. In saying that you must have great respect for the rest of the field, there were some top-quality greyhounds in the race.”

The win hit close to home as Up Hill Jill is owned by Geall’s wife, Rose, and bred by the family.

“To have bred and brought her up ourselves makes it very special. For breeders this is the one of the most sought after races – out of all the big races the Laurels is in the top echelon.”

“It’s special because as breeders we spend a lot of time with the dogs – we whelp and care for them throughout their whole career. It’s a race we all want to win – it’s synonymous with breeding.”

The Laurels is not Geall’s first success at group level however regards the win as one of his biggest achievements.

“We’ve been fortunate to have won Group races before but to win a race like this at Sandown, being the venue it is and the history behind it, it’s sensational.”

Back in October Up Hill Jill was an impressive winner of the Match Maker final at Shepparton, two runs later she was a gallant 2nd to future star Hit The Highway. Following advice from good friends, Up Hill Jill’s Laurels preparation began.

“Good friends of ours (Angela Langton and Jeff Britton) have a greyhound (Hit The Highway) that ran her down and he is a super dog – they thought her run was great and recommended we give her a go at the Laurels.”

Geall took up training greyhounds full-time 9 years ago and was extremely thankful for those who have helped him along the way.

“My wife works full-time though still finds time to help with the dogs, my brother Jeff always gives me a hand and Mick Vaughan takes control whenever I go away. Angela Langton and the Britton’s have also been a huge help. I’ve got a good team around me.”

The Laurels Classic was restricted to female greyhounds only, born on or after 01/06/2014