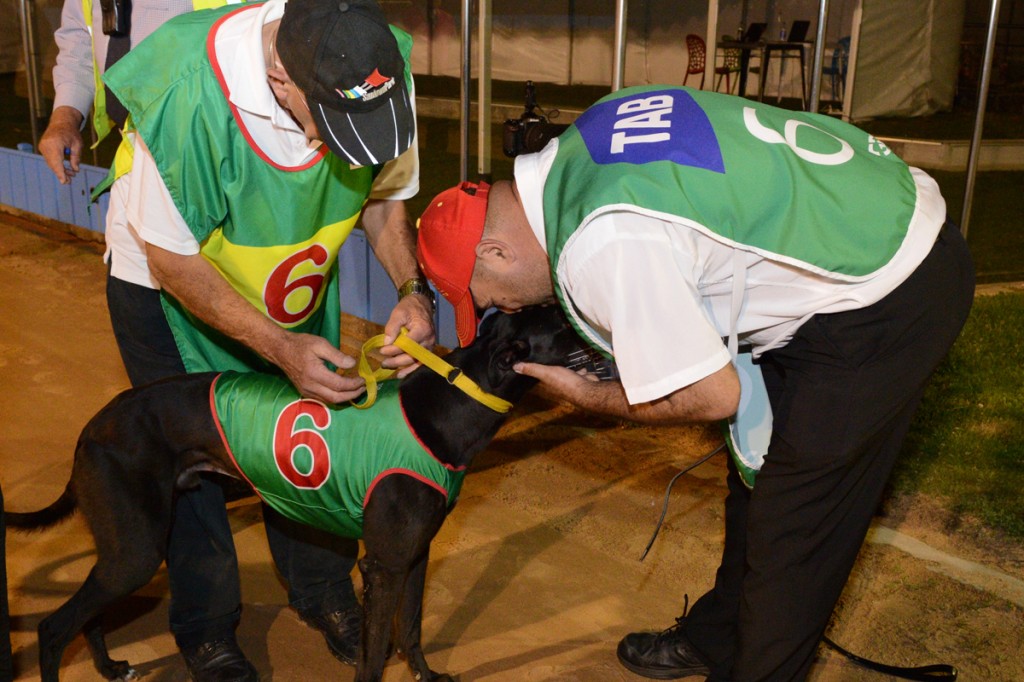 In one of the strongest TAB Melbourne Cup series staged, Zambora Brockie stole the show by leading all of the way to win his heat by nine lengths in a dominant 29.055 seconds. It was the 8th fastest time ever run at the View Road circuit and the fastest time recorded since Unlawful Entry set the track record in March.

“When he jumped out in front it was all over really,” said Zambora Brockie’s elated trainer Anthony Azzopardi of his first TAB Melbourne Cup finalist.

“Words can’t explain how I feel about this dog. It’s a privilege to have him in my kennel. He’s such a great dog and a true champion.”

It was Zambora Brockie’s fourth win at Sandown Park – all in the fastest time of the night – and will now line up in his 10th group race final. A win would be his sixth at group level and catapult his career prize money beyond $850,000.

However Zambora Brockie, or ‘Sam’ as he’s known at home, will have to be at the top of his game to claim the prize with seven other greyhounds pressing their claims in the world’s richest greyhound race.

Amazingly, four of the nine interstate trained greyhounds contesting the heats won their way through to the final.

The night’s first heat was won by Ando’s Mac, trained by leading NSW mentor Jason Mackay, in 29.69. Star South Australian and reigning National Sprint Champion Worm Burner followed with his first win away from his home track at Angle Park in 29.30.

The final two heats were claimed by Queenslanders. Shootout runner up Outside Pass was never headed in his her heat scoring in a brilliant 29.13, and was followed by 20 minutes later fellow Queenslander Tripum. The Lismore Cup winner was well supported in the all-in betting market and he didn’t disappoint those who took the $71 on offer, jumping well from box 7 to lead all of the way in 29.52.

Victorian trained greyhounds have dominated the Melbourne Cup in recent years, winning the last 15 editions of the race. Joining Zambora Brockie in looking to keep the Victorian domination in tact is Jesaulenko (29.31), Matt Machine (29.39) and Barton Bale (29.72) which will line up in greyhound racing’s showcase event at just his 12th career start.

Earlier in the night, in what will go down as one of the great upsets in greyhound racing, star stayer Burn One Down missed a place in his heat of the group 1 Bold Trease and failed to qualify for the $145,000 final. It’s A Fling, one of two Bold Trease finalists for Wayne Vassallo, was the fastest heat winner in 41.89.

As if on cue fireworks near @sandowndogs have gone off just after Zambora Brockie’s freakish win!

Don’t give Brockie the prize just yet. What a run by Outside Pass!! #MelbourneCup @sandowndogs

Couldn’t be happier for both camps, as predicted these were the two that looked the goods!! Bring on next Friday night. https://t.co/CRldfDsOzb

Click on the link below for a replay of each heat.