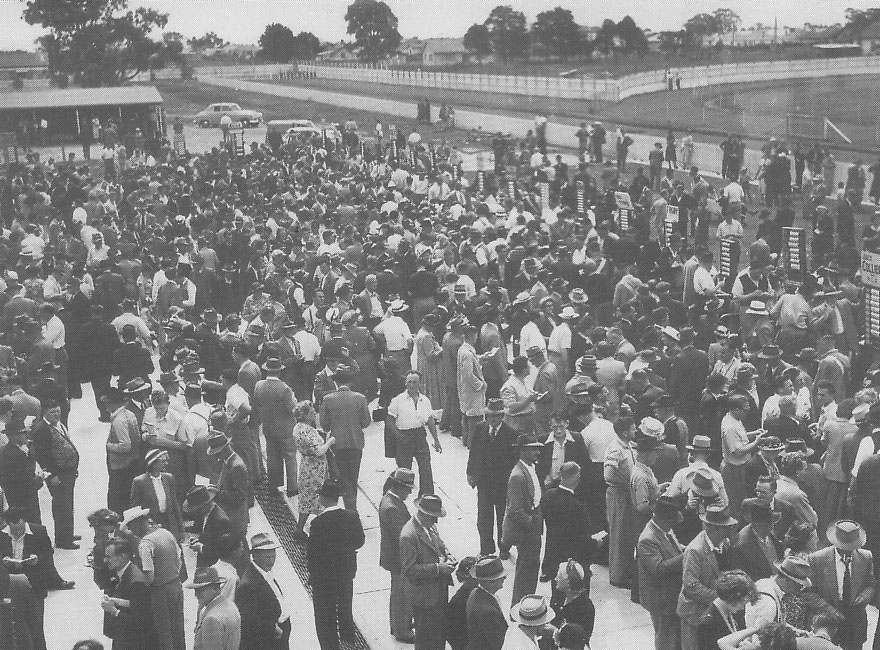 A new era of greyhound racing


Nine months after construction of the circuit began, Sandown Park was set for its gala opening on Saturday 8 September 1956.

1956 was a difficult period for night time entertainment. With the city abuzz ahead of November’s summer Olympics, Melbournians were also welcoming a revolutionary invention into their family home – the television.

Regardless, the much anticipated reopening of the £80,000 modern track and return of the ‘tin hare’ drew people from around the city to Springvale. Media reports of the time vary in their assessment of the crowd, with sources reporting anywhere from 6000 to more than 7000 people attending opening night.

While many caught the train special train from Flinders Street to Springvale (Sandown Park station wouldn’t open for another eight years), the crowd may have been much larger had inclement weather leading into the night not created its own set of issues. Traffic was so dense that police had to close the main road leading to the track, with traffic diverted to subsidiary roads to ease the congestion. As a result, more than 1000 patrons were unable to make it to the track.

And those that did were greeted by a boggy car park, with many cars buried up to their hub caps.

While there issues outside the track, there were few inside.

The Herald report following the opening of the new Sandown Park

The 10 race card kicked off at 7.45pm. The feature event on the night saw Ballarat champion Clear Orb take on the winner of the 540 yard championship of Tasmania, Ophie Kitty. Clear Orb was sent to the boxes a 5/4 favourite, and despite a poor getaway, proved far too good to score by 5 lengths. His winning time of 31.30 seconds was the fastest of the night over the 555 yard journey.

The new track was at the cutting edge of technology of the day. Two photo finish cameras developed for use at night gave the judges access to the image within 45 seconds of a close finish. On the track, the ‘jumping hare’ was used for the first time in Victoria, where an elastic band lifted the lure over the hurdles just ahead of the racing greyhounds. It worked without a hitch, the 2/1 favourite Kef’s Faithful scoring in the only hurdle race of the night by five lengths to land his fourth win in a row.

One of the hallmarks of greyhound racing in the early days was a vibrant betting ring. That was certainly the case on opening night with 53 bookmakers fielding in a packed betting ring. Opening night also saw the on course totalizator in operation on an Australian greyhound track for the first time.

The totalizator proved extremely popular and couldn’t cope with demand after big win and quinella dividends were declared on the first three events. Despite the early issues, the totalizator was extremely successful with investments for the night totalling £5582 – or $173,502 in today’s dollars!

While wagering turnover was enormous, prize money was not. There was just £300 in stakes available on opening night – or $9300 in today’s dollars. By contrast, at the Diamond Jubliee meeting tonight, the 12 race card carries $109,755 in stakes.

Opening night at Sandown Park proved a raging success. The Sporting Globe reported, ‘the track looked a real colourful picture, lighting was perfect and racing was quite good considering the short experience greyhounds have had at the track. (There are) hopes that it will be the first step towards transforming greyhound racing in Melbourne to a degree of popularity equal to Sydney, Tasmania and overseas countries.’

Sixty years later, those hopes have been well and truly exceeded.