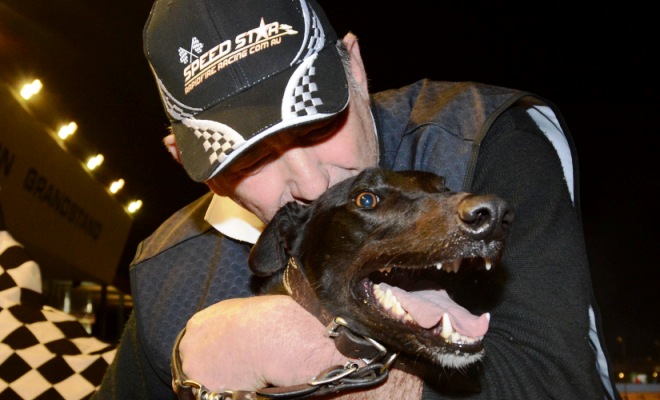 
Dundee Osprey confirmed his status as one of the country’s fastest sprinters with an electric performance in tonight’s Speed Star at Sandown Park.

Dundee Osprey took on Burn One Down in the last four match races. Dundee Osprey gained control early and generated a 3 length break down the break straight. Burn One Down, known for his phenomenal strength, loomed large turning for home but was unsuccessful. The winning time of 29.266 was the fastest time of the four matches, enough to crown Dundee Osprey the Speed Star.

“I thought he’d lead by a couple of lengths. He got away by about three and I thought he had a big enough break to hold Burn One Down off. As strong as Burn One Down is to come from behind and get around a dog it was always going to be a big ask,” said trainer Geoff Scott-Smith.

“When he comes here to trial on a Saturday morning he goes about 29.25 – after Brockie set his time (29.292) I thought we were a chance to sneak under.

“It’s a big thrill, a great feather in his cap.”

Dundee Osprey trialed his way into the series with a 29.237 on the Sunday prior to his National Sprint task in Adelaide.

“Things have worked out like clockwork – with the week off before the National final I was able to trial him here and luckily qualify for the series.”

Scott-Smith was always confident of his charge’s ability though was uncertain if he’d one day be able to mix it with the best.

“Six months ago I knew he was a good dog and had a lot of ability, I knew he was going to eventually come up against all these good dogs but I wasn’t sure if he’d be able to handle it. Since then he’s proved that he can match and beat the best.”

The win further highlighted Dundee Osprey’s superb record at Sandown Park, his fifth from eight starts including a group 1 Harrison-Dawson win in May.

Along with $10,000 for winning his match and a bonus $15,000 for the fastest time, Dundee Osprey now gains automatic entry into November’s $50,000 winner-take-all Shootout.

Despite being beaten in his match, Burn One Down registered the second fastest time earning connections $6000.

In Speed Star match 3 the enigmatic Jesaulenko got the better of Shima Song in 29.480.

Dundee Osprey defeats Burn One Down in 29.266