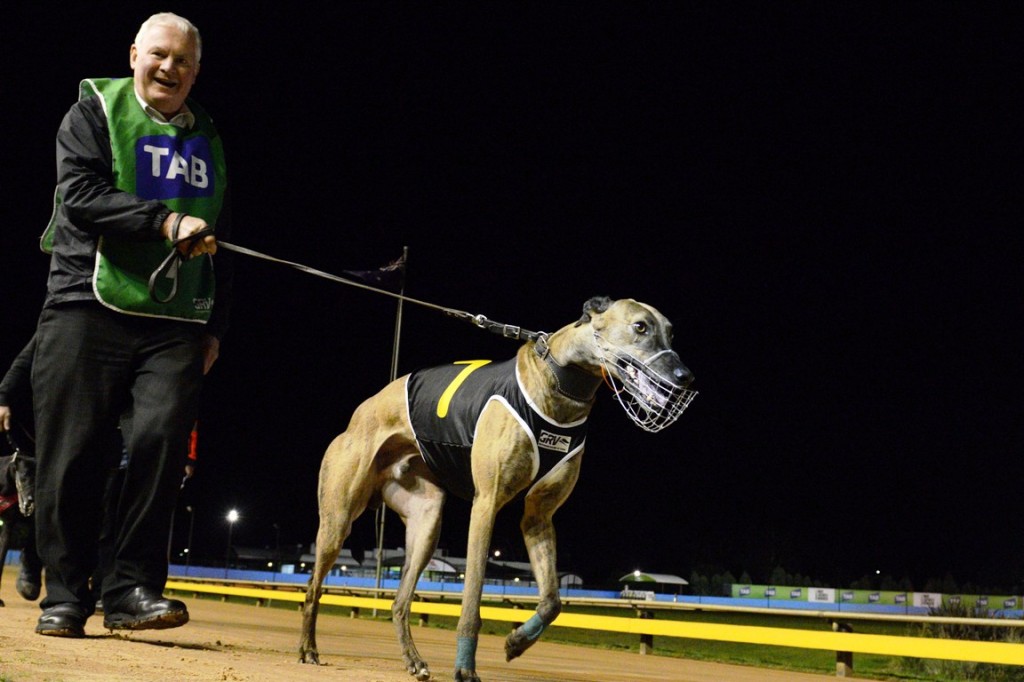 
Gerry O’Keeffe continued his remarkable run of success at Sandown Park tonight when Ring The Bell claimed the Victorian final of the National Distance Championship.

Ring The Bell was sent to the boxes a $9 chance with TAB, and following a clean getaway from box 7, had assumed a rails position by the first turn behind early leaders Come On Fantasy and Son Of Bekim. With odds on favourite Burn One Down finding trouble and at the rear of the field, O’Keeffe confidence soared as the field passed the winning post for the first time.

“I was very confident with a lap to go because he was on the rail in third and Ring The Bell is exceptionally strong,” said O’Keeffe following the race.

“Come On Fantasy moved off the rail and Ring The Bell sailed through, and with Burn One Down getting a bit of backwash at the back of the field I thought ‘tonight’s our night’.”

And it would prove to be, as Ring The Bell railed to the lead entering the back straight before powering to a seven length win over defending National Distance Champion Lady Toy in a slick 41.53.

“The time is exceptional, faster than I thought he could run. I will have to eat my words when I was saying that he’s a very handy mixed stake dog!” he said with a chuckle.

O’Keeffe’s assessment was somewhat understated given Ring The Bell’s winning time was the 10th fastest time ever recorded over the distance, was his third win in a row and 14th overall, and now boasts more than $120,000 in prize money. Ring The Bell will now represent Victoria at the National Distance Championship final – his fourth group 1 final – at Angle Park on Saturday 27 August.

It is a race that Victoria has an outstanding record in, having won 24 of 47 editions. It also represents Ring The Bell’s best opportunity so far to break through at the highest level in a race that he looks perfectly suited for.

“The thrill is that he’s already been to Angle Park (over 515m). I’d love to draw down near the rails but we’ll take whatever comes our way, I’m just delighted to be representing Victoria in the National Distance Championship.

“I cannot believe the success we’re having, but long may it continue!”