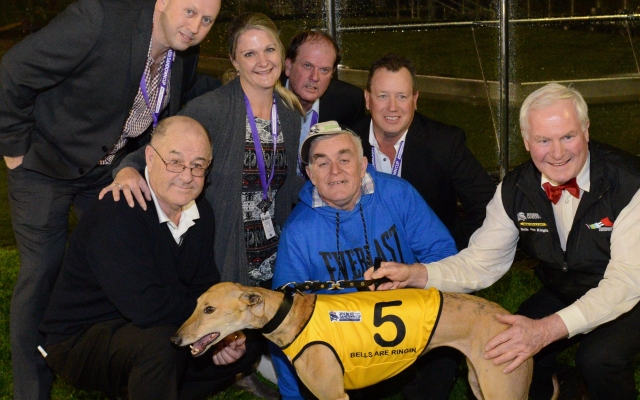 O’Keeffe hopeful ahead of Distance heats


Bells Are Ringin returns to Sandown Park tonight for the first time since her RSN927 Sandown Cup triumph in heat 1 of the Victorian National Distance series.

“She’s beautifully drawn in box 1. The obvious danger is Jason Thompson’s Burn One Down, he has all the ability in the world – he’s a potential champion,” said trainer Gerry O’Keeffe.

“If she can do what she’s been able to do in the past and roll along in front she could be hard to beat. We do rely on a bit of luck as she’s not the fastest dog in the field – she makes her own luck and we’ve seen that time after time – she’s exceeded our expectations so many times over.”

The second of O’Keeffe’s two pronged attack is Bells Are Ringin’s litter brother, Ring The Bell, who was the winner of last Saturday’s Destini Fireball final at The Meadows.

“His performance didn’t come as a surprise – he wasn’t drawn well but once he finds the rails he’s a different dog entirely. He’s always been 6-8 lengths faster than her (Bells Are Ringin).”

Ring The Bell’s stint in Brisbane throughout June has proven to be one that has had a significant impact on his racing since returning home.

“Since he’s come back from Queensland he’s been far more consistent. I’ve noticed a different attitude from the dog – he’s not nearly as immature as he had been prior to going to Queensland – he’s come back with a better racing mind.”

“He’s beautifully drawn in box 3 tonight, he gives me every expectation that he’ll run an outstanding race.”

Prior to O’Keefe’s avalanche of recent success, he held low expectations and high hopes for his small team. Now after multiple group wins he was strong in his answer when asked if his expectations have changed.

“Not in the slightest. We’ve had a lot of good luck in the last 6-8 months, luck doesn’t last forever and the rocky shore of reality is never far away – I know I sound like Bart Cummings saying ‘we’ll just take it one week at a time’, but we’ll continue to keep our fingers crossed.

“The family will be along at Sandown tonight and we will all be delighted with whatever comes our way.”