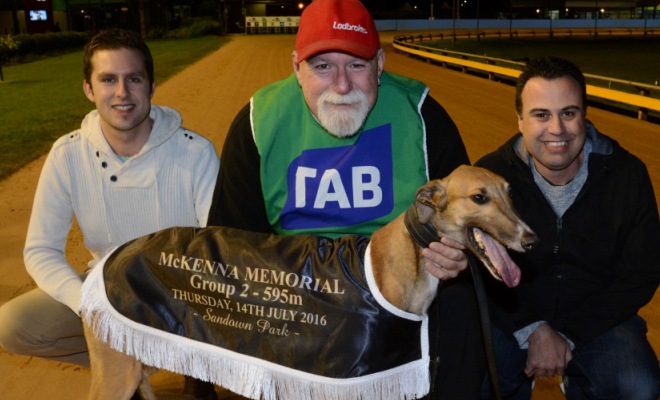 Bruce Tycoon sprung out of box two and set up a commanding lead. He showed no signs of stopping as he went on to win by 2¾ in 34.10.

Peter Riley , acting on behalf of trainer Rob Britton, was full of praise.

“He’s done everything right from day one. He’s free-for-all class at both city tracks, we’ve been looking to step him up to 595m for a little while but nothing was around until heats of the McKenna.

“I’d say he’s underrated but how can you underrate a greyhound that has won over $100,000. He’s a dog everyone would love to have in their kennel – he’s got a wonderful personality and just loves to race,” he said.

Bruce Tycoon or Bruce as he’s known to connections, exceeded expectations of his owner Gary Micallef.

“It was unexpected – I thought the red was going to be hard to beat. I didn’t think Bruce would run the distance as well as he did,” said Micallef.

Bruce Tycoon is owned and bred by the Odds and Evens syndicate consisting of Gary, his brother Phil and late father Charlie who passed away in March last year.

“Luckily dad got to see Bruce win his maiden before he passed away. I carry his ring when I’m hoping for some luck – I’m wearing it around my neck tonight. I also wore it when Bruce won here in March, which was on the anniversary of dad’s death. It’s a bit surreal.”

The Micallefs have a long history in greyhound racing at various levels of participation within the sport.

“Dad bred dogs for a period of time then stopped as it got a bit too hard. He got back into it, but in the late 90’s he suffered some heart attacks and at that stage we were thinking about giving up racing greyhounds.

“Alan Britton came to us and offered a greyhound called Spalding Miss. She had retired and he suggested we breed with her. Dad agreed and from that litter we got New Year’s Punch. She’s Bruce’s mother.”

“When Bruce retires he has a kennel waiting for him at my place,” chuffed Micallef.

The McKenna Memorial is named in honour of the Sandown Greyhound Racing Club’s first administrator, Jack McKenna. “Mulga” McKenna was regarded a doyen of racing administrators in that era, and held the position from the club’s formation in 1956 until passing in 1970.

The Sandown Greyhound Racing Club will celebrate its 60th birthday on Thursday 8 September.