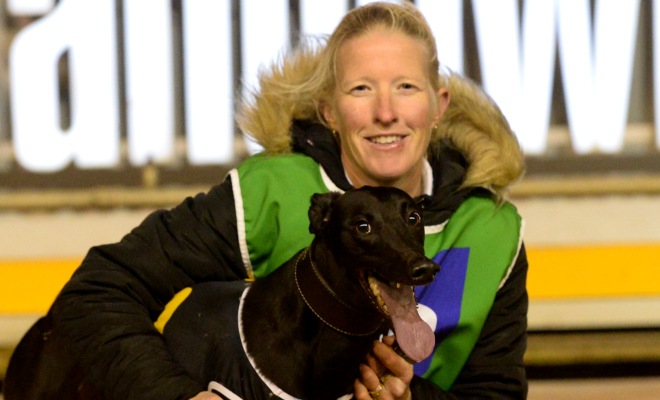 
Polijuice Potion will be out to capture her second group race win in next week’s McKenna Memorial final.

Polijuice Potion bounced back to her best in her heat when comfortably defeating group 1 Harrison-Dawson winner Dundee Osprey in 34.21 – the fastest heat win.

“It was so good to see her jump well, she’s been missing the start a heap lately.

“We couldn’t get her a start over 595m – it was only last week she was able to get a run over the distance again,” explained trainer Lisa Cockerell.

Polijuice Potion’s biggest fans and part owners, Cockerell’s 5-year-old twins Taylor and Morgan, were absent on Thursday night though their encouragement was in full swing at their Buckley home.

“They won’t be happy they weren’t here to see the win – I’m going to cop it when I’m home,” laughed Cockerell.

“We went to Sovereign Hill for two nights and they were knackered, we had four dogs in the first three races so they were better off staying home – I’m sure there would have been a lot of screaming coming from our house during the race.

“They’ll be here next week and they might even get the Friday off school!”

Polijuice Potion will jump from box eight in Thursday’s Group 2 McKenna Memorial final and is rated a $4.40 chance by tab.com.au – click here for full market..

Thursday night is Vegas Night at Sandown Park and will feature an Elvis Presley tribute show. To book or for more information contact the club on (03) 9546 9511.

Polijuice Potion wins her heat of the McKenna Memorial