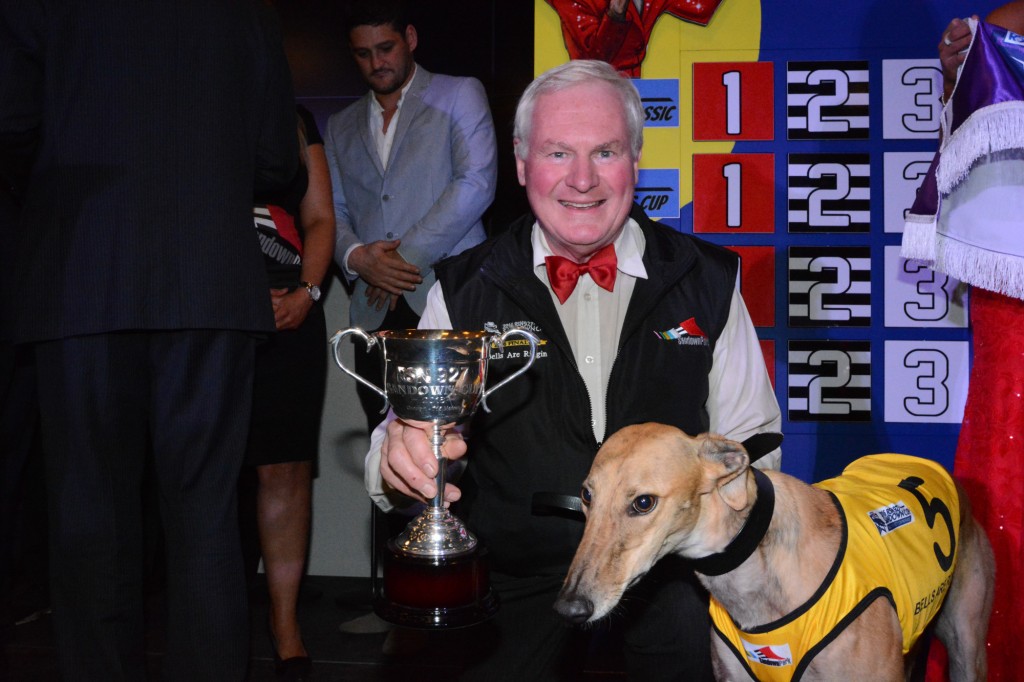 
Bells Are Ringin caused one of the biggest upsets in group racing history when she defeated the country’s best stayers in the RSN927 Sandown Cup tonight.

Sent to the boxes the 50/1 outsider, Bells Are Ringin began well to cross to the rail and lead the field through the first turn. From there she was never headed, finding the line two lengths clear of Who Dey in 42.02.

For trainer Gerry O’Keeffe – just two years returned from a 28 year absence for the sport – the win was the thrill of a life time.

“I thought this would be a great night for her to jump. She did, and cleared them by a whisker and crossed to the rails. I thought ‘goodness me, I’m going to run a place here!’ She’s always been clean winded but she had been run down a few times when she first started over the distance – I blame myself for having her a little heavier than she needed to be – but I’m learning as I go along. To hold off those good dogs, what a thrill,” he said.

The story of O’Keeffe and his RSN927 Sandown Cup winner is a remarkable one. Finishing up after 35 years as a prosecutor for the Department of Agriculture, O’Keeffe and long time friend Kelvin Jones decided to get back into the sport by training five greyhounds from his 10 acre Neerim Junction property. At that time, his son in-law Glenn Pask had bred and reared a litter of pups and was looking for a trainer.

Among those pups was the runt of the litter, Bells Are Ringin.

“This little dog was so sick for the first four months that she couldn’t be sold – she looked like a guinea pig with a rat tail. She’s only tiny – 24 and a half kilograms – of which 23 would be heart.

It was a popular victory, with no shortage of well wishes for the affable 63 year old.

“I really am living the dream. Kelvin is a co-trainer and integral part of the team. We have vigorous discussion about different ways of doing things but we always work out a consensus and so without Kelvin I couldn’t be doing any of this. With the support of Kelvin, with my cousin and family here tonight – it’s pouring down rain but I’m living the dream.”

Despite the win in the world’s richest greyhound race, O’Keeffe had no plans for elaborate celebrations.

“Greyhound racing is a great sport for anyone who wants to be physically and mentally active in their 60s and 70s and I couldn’t recommend it highly enough. I’ve said to a lot of my friends in my age bracket that one of the best things you can do for your mental and physical well being is to put two kennels in your backyard because it gets you out, it gets you involved. The dogs are always so happy to see you in the morning it makes you feel great when you’re just pottering around with the dogs, enjoying the dogs and enjoying the sport.”

The RSN927 Sandown Cup was Bells Are Ringin’s 16th victory from 39 starts, and the $175,000 winner’s cheque catapulted her winnings beyond $259,000. The group 1 Gold Cup at Albion Park next Thursday night will be her next assignment

It was the second feature race winner this carnival for owners Glenn Pask and the Four Frothys Syndicate after Bells Are Ringin’s litter brother Blazin’ Bomber won the group 3 Bill Collins Speed Star. It was also the third consecutive group 1 win by hobby trainers following Steve Creighton’s victory with Narralee in last week’s Sapphire Crown, and Geoff Scott-Smith’s win with Dundee Osprey in the Harrison-Dawson.

Earlier in the night, the first reserve for the RSN927 Sandown Cup Mepunga Rosie won the listed Cup Night Stayers and Both Sides Now the Cup Night Sprint for the country’s premier training partnership of Jeff Britton and Angela Langton.

Despite the inclement weather, one of the biggest crowds in modern Sandown Cups braved the elements to enjoy the night of greyhound racing. Former AFL star Brendan Fevola entertained the crowd as host of the greyhound game show ‘Pick a Dog Box’ with Di O’Neil picking up $10,000 cash.

Bells Are Ringin wins the world’s richest race for stayers