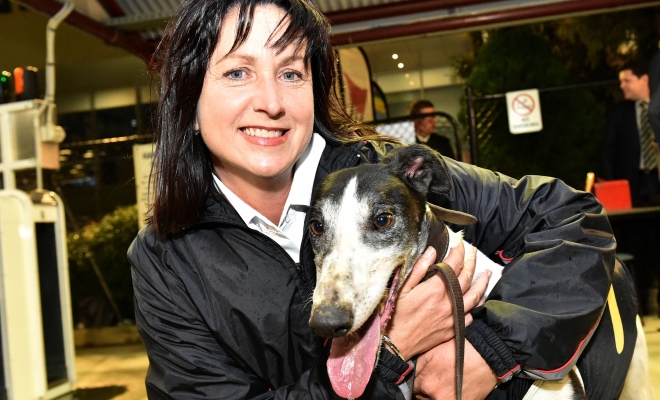 
A flourishing form line has come at just the right time for Wind Whistler as he prepares to line up in this Thursday’s RSN927 Sandown Cup final.

Wind Whistler was ultra impressive last Thursday night when he produced a last-to-first win in his heat. Not only does his will to win stand out, but also his ability to thread his way through a field, something his trainer Angela Langton is praiseful of.

“The way he can navigate through a field is amazing – he’s been able to do it since he was young, it’s one of the bonuses with him,” said Langton, a qualified scientist who spends two days a week working in a laboratory.

Wind Whistler has battled some minor injuries in recent times, ones that have been able to be managed while still producing his best on the race track.

“He is getting older and more prone to little niggling injuries.

“To look after him we take him for walks at the beach and not trial him around bends, just up the straight at home. That’s the only knock he has, apart from that he’s racing in career best form and it’s a great time for him to be doing that.”

It took a handful of runs over the staying distance to find his feet, but with experience and age he is now one of the country’s more fancied stayers.

“In his first few tries over the distance he got tired in the final 50m. At the time Jeff and I disagreed whether he’d run the distance out – though as he’s got older he’s also got stronger.”

Langton and her partner Jeff Britton have formed one of more formidable training combinations in the sport, with the pair combining to win 134 races at Sandown Park alone in 2015 at an impressive 20% strike rate. Wind Whistler, like many of Langton’s greyhounds is raced by the Champagne Syndicate consisting of Langton and her mother Sue Smith. Wind Whistler was purchased from Queensland as a three month old pup and has gone on to win 19 races and $180,000 in prize money.

“Mum and I have had a fantastic ride – I’ve been involved since I was 18 and we’ve had a lot of success together over the years. We’ve gotten involved with the right people – we’ve learnt from and listened to the best.

“It would be amazing if Wind Whistler could win the Cup. He’s one of my favourite dogs if not the favourite – he’s very special to me.”

Wind Whistler is set to jump from box four in Thursday’s RSN927 Sandown Cup and is rated a $11 by tab.com.au.