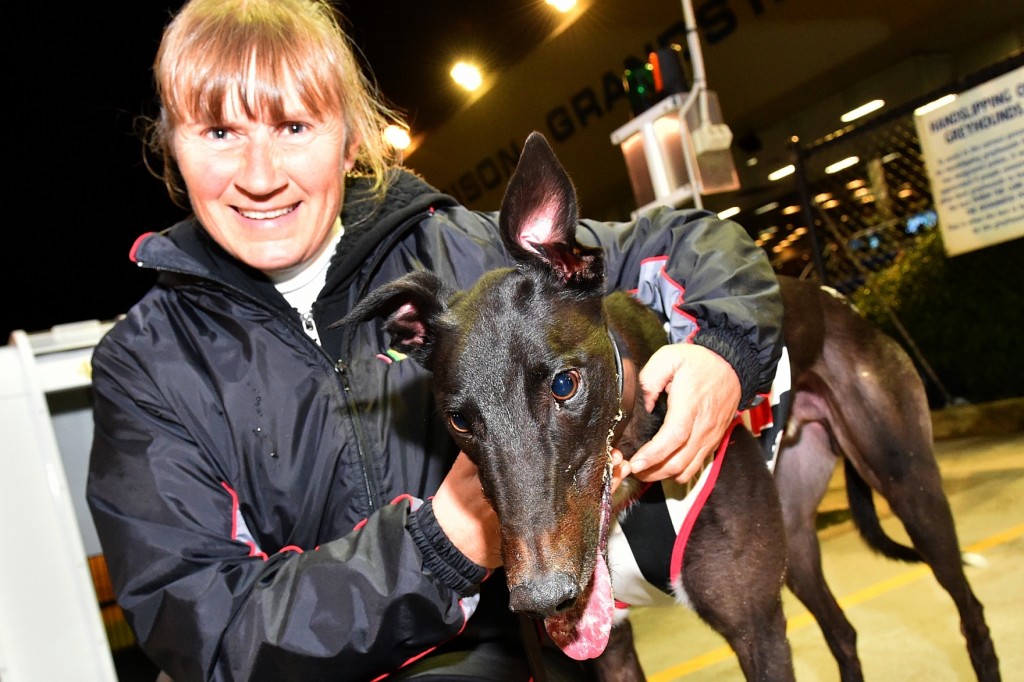 Her exciting chaser, Zipping Kane, began well in his heat last Thursday night but was forced to settle third behind early leaders Revision and Ring The Bell. At the second turn, a gap between the two opened allowing Zipping Kane to charge through and assume the lead before powering to a 4.5 length win in 41.83. The result was particularly pleasing for Jones after Zipping Kane pulled up sore after making his staying debut in March, almost derailing his Sandown Cup campaign.

“I was a little concerned, I would have preferred him to have a few more runs leading in,” said Jones.

“He pulled up a bit sore after his Meadows run and was a bit tired too, a bit flat. He had a hip support problem – nothing bad – but he had a bit of time off which left us a bit short of time with what we’d ideally have liked to do leading into the Sandown Cup. But he did it well last week and he pulled up well so I was very happy.”

His progress since returning from a month on the sidelines has been impressive. After being placed in his first two runs back, Zipping Kane won the group 3 Racecallers in slick time over 595m at Sandown Park, then won again 10 days later over 650m at his home track in Sale. Just four days later he qualified for the world’s richest staying race and enters the final as a strong winning chance.

“He’s been terrific this week, he really thrives on hard work and I couldn’t fault him at all. I let him out the next morning (after his heat win) and he just wanted to gallop. I even thought about giving him another run behind the lure, but because of his injury I’d given him a lot of close runs leading up to this just trying to get him there, so I’ve just free galloped him this week so he should be fine.

“I would have preferred to have been drawn inside, but as it’s panned out with where the others have drawn, I’m not unhappy to be where he’s at (in box 7). He doesn’t have a lot of pace drawn around him, and the dog on his inside wants to push in so he should get some room early. I’m quite happy with where he is.”

Jones is no stranger to group 1 finals. In 2010 a greyhound she bred and reared named El Grand Senor emerged to win three group 1s – including the TAB Melbourne Cup – on his way to claiming the Victorian and Australian Greyhound of the Year titles. He’d go on to win three country cups in 2011 before retiring with a record of 35 wins from just 43 starts and over $533,000 in prize money. While winning the race was a thrill, the prize money also took a lot of pressure off.

“It’s what we all do it for, to win races like that. And because he was ours – we bred him and raised him as a pup – it made it a bit more special,” she said.

“The prize money allowed me to pay off my property and to set it up how we wanted to do it. It’s given us the freedom to do as we wanted.”

After spending a few years ‘mucking around with her horses’ and managing El Grand Senor’s stud duties, Jones decided it was time to get back into greyhound training. With six race kennels on her state of the art property in Rosedale but with no pups of her own – she had only ever trained her own dogs – she contacted one of the country’s leading greyhound breeders and educators Martin Hallinan to see if he had any greyhounds that she could train. Hallinan was happy to oblige and the result was both immediate and impressive.

“I was lucky, that litter (including Zipping Kane and Zipping Zeus, which is also engaged in race 9 on Thursday) was the first that they sent down and I was extremely lucky and extremely grateful. Ever since they’ve started racing they’ve continued to race well.

“Marty has had a lot of good stayers and has a very strong breeding line, he always felt that Kane would be better suited once he got over more ground.”

So far, Marty has been on the money.

Zipping Kane qualifies for the RSN927 Sandown Cup with a brilliant 41.82 heat win