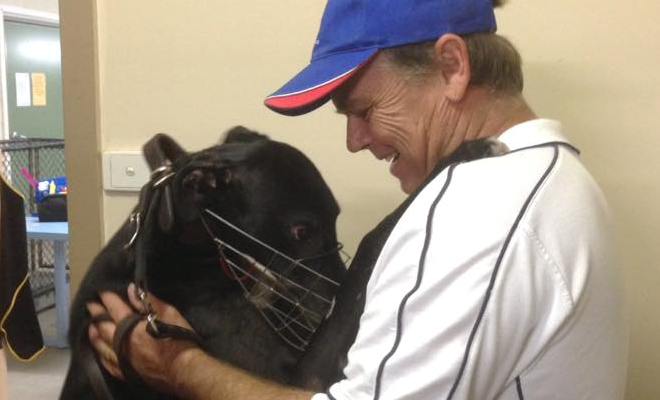 Old Spice the pride of Priest


Old Spice will be cheered on from the heavens this Thursday night when he lines up in a heat of the Harrison-Dawson.

Trainer Terry Priest has a team of 10 greyhounds in work but it is Old Spice, a favourite of his late father, which stands above the rest.

“Dad reared him until he was 10 months of age before passing away. We decided to name the dog Old Spice as it was the after shave dad used – wherever he went he wore Old Spice.

“The family all remembers seeing dad out in the paddock wrestling with the dog – he loved him, it was his dog. He was special to dad therefore he’s special to our family, and he’s turned out to be the best dog we’ve put a collar on.

“Mum does a lot of work with the dogs helping me out, she’s 71 (years old) now – it’s special every time this bloke goes around. Old Spice has gotten better and better, we believe dad is looking down on him helping out.”

After sensationally breaking the Maitland’s 450m track record in his last start, Priest decided to make the journey from Sawyers Gully, a small town outside Newcastle, to the bright lights of Sandown Park.

“It was a last minute decision to have a crack at the series. I hope he can settle at the front of the field, after that it’s all up to him.

“When a track record gets broken it’s always a surprise, it’s not something you think is going to happen when you go to the track. I was confident he’d run good time as he had done all his work as a pup there. He’s going really well so it’ll be worth the trip to give him a go – he’s travelled well in the past so the drive won’t affect him.”

Amongst the 32 runners in the Harrison-Dawson heats Old Spice is the oldest at 3½ years of age.

“The old timers will tell you that is when they’re in their prime – he’s been lightly raced so that’s one of the reasons why he’s still going so well today.”

Priest and his family have had a long history in racing. He ran a business specializing in industrial sandblasting and painting within the mining industry, however with the minding boom winding down he has decided to turn to training greyhounds full time.

“As a teenager I was always walking greyhounds for friends. Growing up I was into sport, I played a lot of football and cricket – my dad had race horses but greyhound racing was something I was always attracted to.

“I’ve been training for over 20 years now and have always had a few dogs in work – I’ve always had a full time job so never been able to take it up full time. We’ve got a six acre property and have been here for 18 years, shortly after I moved in my parents followed and got involved with the dogs they loved it so much.”

Old Spice will jump from box seven in heat three of the Harrison-Dawson and is rated a $14 chance with tab.com.au.