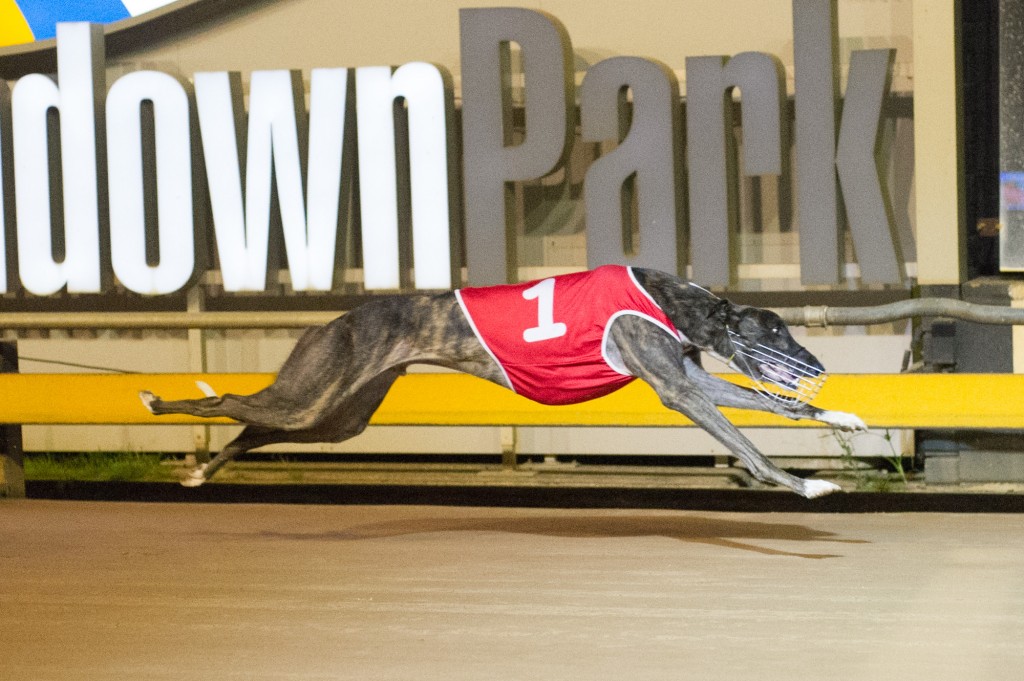 Jumping from box 1, Unlawful Entry pinged to the front and was never challenged, extending  his lead at every split and racing to an 8½ length win in 28.951 – 0.009 seconds under Bekim Bale’s previous record.

“Once he jumped I knew he’d run quick, and when I saw his second split I just thought ‘wow’,” said his elated trainer Kelly Bravo.

“I looked up at the clock when they crossed the line and I actually read the clock wrong – I thought he had run 29.35. I thought ‘oh well, he got home a little bit slow but a win’s a win.’ But then I heard the race caller Rob Testa say it’s the track record.

“He’s a fast little dog so it’s not surprising he ran that time, but it was surprising that he’d jumped that well.

Unlawful Entry’s rise to the country’s elite chasers has been remarkable given the modest start to his career. He had won three of his first 10 starts when Kelly’s husband Brett spotted Unlawful Entry advertised for sale online. Brett completed the deal, and then set Unlawful Entry for the group 2 Great Chase. He subsequently won his heat, semi final and final, then went on to win the listed Cup Night Sprint and group 1 Hobart Thousand, and has reached a further five group finals. Since arriving in the Bravo kennels in September 2015, Unlawful Entry has won 11 of 21 starts and with his track record win, took his career prize money to $218,915.

“I was kennelling at the Meadows when Brett told me we’d just bought a dog for $15,000. He knew the dog could run and we thought he was a nice little grade 5 dog that we can tick along with, so he exceeded all of our expectations straight away.

“He’s actually Bronte’s dog (Brett and Kelly’s 13 year old daughter). She’s not here tonight because she’s got school tomorrow but she’s got a great eye for the dogs – when she picks something out you listen. Whether or not it’s something she wants to do in the future I don’t know but if she did she’d be good at it.”

“At the Meadows two weeks ago he ran quicker than they went in the Australian Cup final, but then the next week he tried to get off the track and got held out the whole way. We thought we’d take him out to the bush to try and get an easy run for him.

“At the last minute we decided that since we were coming here he can have another run. Fortunately he jumped well and it paid off.”

Bravo is undecided on Unlawful Entry’s next assignment, however the Bill Collins Speed Star on Thursday 5 May is on the agenda, as race for which he is all but guaranteed the top seed. The match race series carries $61,000 in prize money and is open to the eight fastest greyhounds at Sandown Park since 1 February.

But first – a trip to McDonalds is in order.

“We usually give them a vanilla thick shake and three nuggets after a run. I might have to order a few extra nuggets tonight!”

Pleasure to see something like that in the flesh, amazing! https://t.co/Ke3czzYhM7