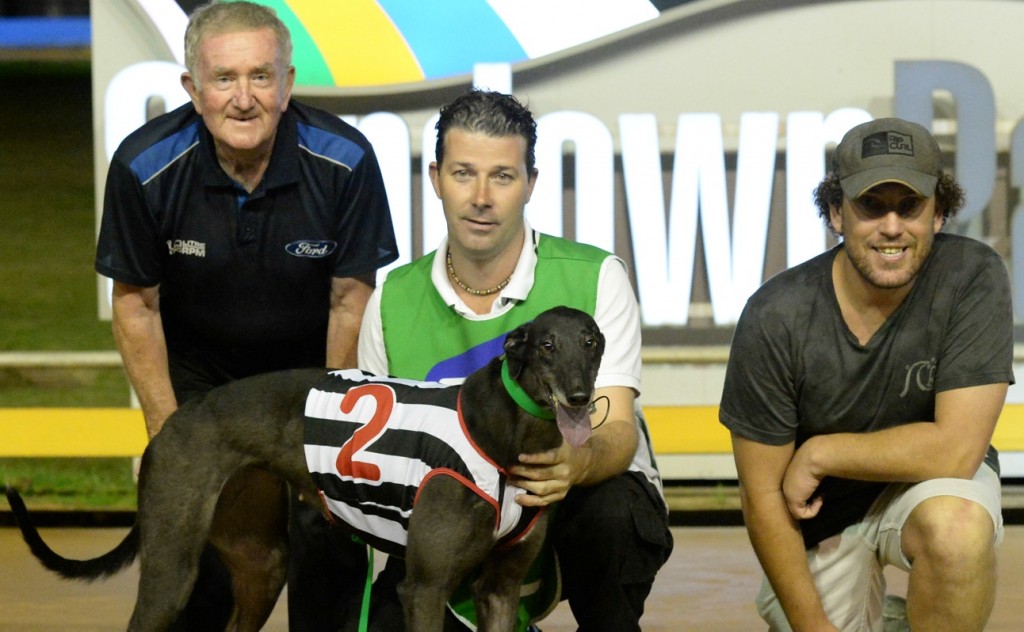 
Twin brothers Daryl and Colin Brennan were nothing but delighted as Deano’s Gadget recorded her first city win last night at Sandown Park.

Deano’s Gadget took advantage of clear running early to lead at the first bend. From then it was game, set and match. Deano’s Gadget went on to win by 3 ½ lengths in a slick 29.60.

Trainer Daryl Brennan watched the race at his home in Ross Creek and was pleased with the run.

“I thought it was a great win – she jumped well and was able to hold her position. She’s fairly strong so when she got that three or four length break down the back straight I knew she was going to be hard to beat – we couldn’t be happier with her,” said Brennan.

“A winner in town certainly gives us an extra thrill – we’re lucky that Deano’s Gadget can run 500m which gives us the opportunity to take her to the metro tracks.”

Deano’s Gadget hasn’t always called the Brennan kennel home, having relocated there in December after having 40 starts under the guidance of Gary and Wendy Hansen.

“Her owners gave us a call and at the time we didn’t know too much about them or the dog. Her previous trainer believed she needed a change of kennel just to give her some spark – we’re over the moon that we were given the opportunity to give her a go.”

“Her owners are very passionate, they go to the track every time she races – they were absolutely ecstatic with her win last night.”

Before training greyhounds full time the Brennan brothers ran a plastering business that has since been placed on the back-burner, giving them time to concentrate on what they love.

“We still do a bit of maintenance on the side and work a few days here and there to assist with income – one day we’d love to give the plastering away and spend all our time on our greyhounds.”

Brennan has been training for 24 years after he was generously given a greyhound as a youngster at only 18 years of age.

“I started with a giveaway dog which a work mate of my father’s gave to me. The dog was named National Invader, I was only able to win one race with him though he gave me the bug and after that I was hooked.”

Last night was also highlighted by Sandown’s Shades of Greyhound Girls Night Out. The night raised $10,000 for the Leukaemia Foundation and the Monash Health Breast Oncology Unit, click here for more.

Deano’s Gadget gets the better of her rivals in 29.60
< Previous
Next >