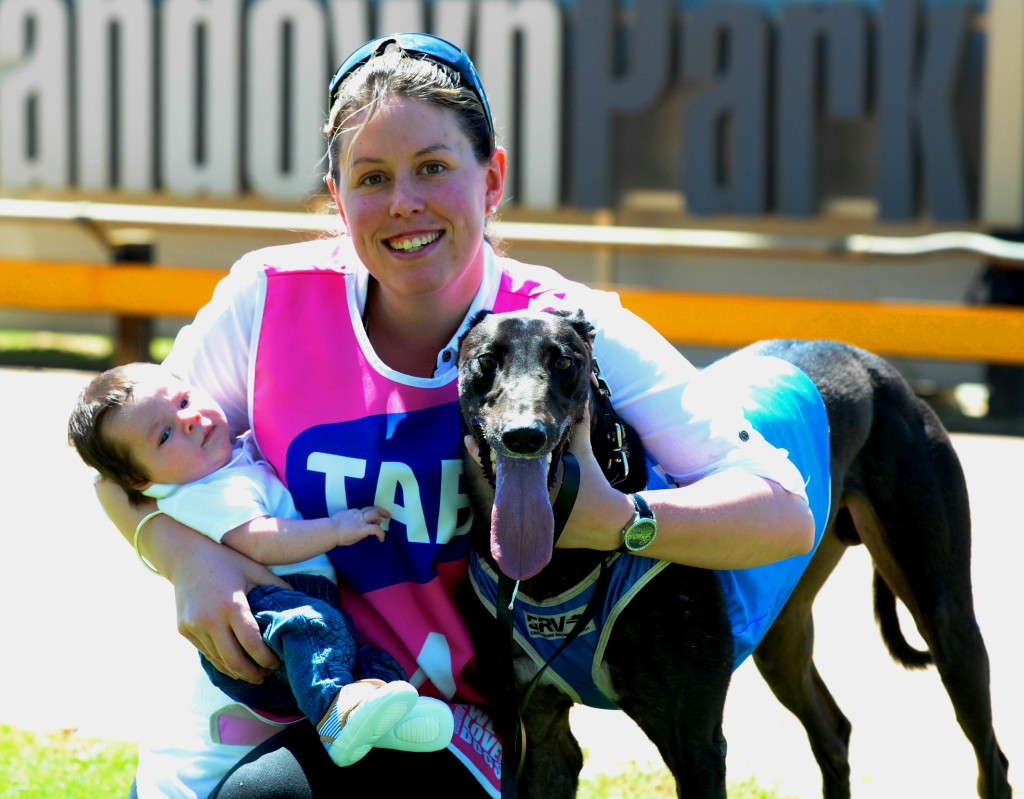 
What’s Up Herbie may not be the most talented greyhound in Victoria, but his win in last Sunday’s Judy Hayley Memorial heat is one that will forever be special for trainer Karen Pitt.

It’s was Pitt’s first time handling a greyhound since giving birth to her son Toby on New Year’s Day, and made all the more special by having him and the rest of her family trackside to share in the win.

“It’s good to get back to the track again,” said Pitt.

“Mum and my sister were there too. We had a nice lunch and enjoyed watching a few races at the track, so it was a fun family day out. And to win the race was pretty special.

“The photo with Toby and Herbie is one that we’ll put up on the wall and look back on. We’ll probably bring up at his 21st – his first day at the races and we had a winner.”

Now in its fourth year, the Judy Hayley Memorial has fast become one of Sandown’s signature racing events. Restricted to lady trainers, the final is the feature event at the club’s Shades of Greyhound Girls Night Out. Cocktails, music, dancers and a heap of activities feature off the track with proceeds supporting the Leukaemia Foundation and Monash Health Breast Oncology Unit.

“We’ve had a few dogs in the heats in the past but Herbie is our first one through to the final. It’s a great race for the women to be involved in, the women are often at home while the boys are having fun at the track so it’s great that we can get along and enjoy the night out!” said Karen, laughing.

“There’s a lot of women that work hard in the industry and it’s great that that can be recognised on a night like this. It’s a lot of fun getting the girls together and enjoying a night out and raise some money for a couple of great causes too.”

Like so many trainers, Karen’s love of the sport was instilled in her from an early age. Her father trained greyhounds before she was born and would regale with his stories from his days at the track.

“Dad’s stories were just amazing to listen to, so one day I said to him why don’t we get one as a family? I was about nine and I picked out a pup from the paper that I liked, we went up and bought her and have always had a dog or been at the track since.”

And it’s little wonder. The pup, Fluent Lee, would run second in the Richmond Oaks and NSW State Championships, and was a regular in Free For All class at Wentworth Park. She would also go on to have an impact on the breeding scene, producing group race winners Miss Bekkie Lee and Magenta Rose.

“It was a pretty decent start to the greyhounds, not everyone gets a fast one first up! She was obviously pretty special to girl to me, she lived with me as a pet until she passed away.”

With racing in her blood, Karen would move from her home in New South Wales to work for one of the leading kennels in Western Australia, and it was there that she would meet the other love in her life, prominent Victorian trainer Wayne Vassallo.

“I was racing in the Perth Cup and Wayne had come across to race in the Galaxy. That was seven years ago – long story short – we hit kicked it off and I moved over here and we’ve been together since. My whole family have moved here now, it’s definitely home.”

What’s Up Herbie was a popular winner among the large crowd on track last Sunday. Despite his impressive heat win in 29.74 seconds over the 515m journey, Pitt is cautious about his chances of adding to his six career victories in Thursday night’s final. However, she only has praise for what is clearly her favourite chaser in the kennel.

“Unfortunately he’s drawn poorly in the pink (box 8). If he was jumping from box 1, 2 or 3 I’d be a little more confident. If he can show his speed like he did on Sunday then he’s a chance to be up there with them early and if he can somehow find a way to get across he’s a chance, but I think he might find it a bit hard.

“He’s just so honest, just tries so hard every start and that’s why we love him. What he lacks in ability he makes up for in heart – that’s what we always say about it him. He might not be the fastest dog in the kennel but he’s like a pet and won’t be going anywhere any time soon.”

The Judy Hayley Memorial (race 3) will jump at 7.43pm on Thursday night. Click here for your free Watchdog form guide.

Limited tickets remain for the Shades of Greyhound evening, click here to secure your ticket.

Paw note: The Judy Hayley Memorial is named in honour of the popular 2001 Melbourne Cup winning trainer who sadly passed away in 2012.

What’s Up Herbie charges into the Judy Hayley Memorial final