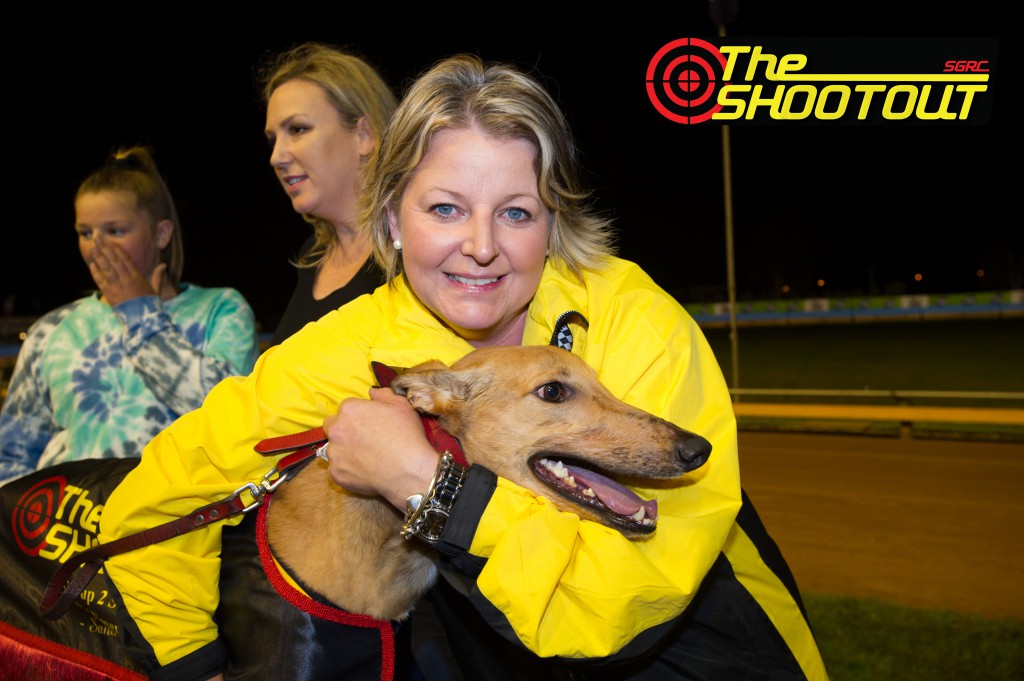 
Kayda Shae cemented his position as one of greyhound racing’s elite chasers with a thrilling win in tonight’s $50,000 winner-takes-all Shootout.

Lining up in the seventh group final of his 24 start career, Kayda Shae ($1.80F) began only fairly before mustering quickly to lead through the first turn. While his rivals jostled for position, Kayda Shae extended his lead to six lengths entering the back straight before Dyna Double One ($4.10) set off in pursuit. Off the back, Dyna Double One began his move, reducing the margin with every stride but Kayda Shae remained resolute, saluting by half a length in 29.33. Brad Hill Billy finished a further 4.75 lengths adrift for third.

“It got a bit close at the end!” said the relieved winning trainer, Kelly Bravo.

“There’s a lot of pressure in the race, and this type of race does leave him a little exposed so it was nice to be leading through the first turn. We all know how strong Dyna Double One is – he’s every bit as fast as Fernando Bale but without the early speed – so to be able to hold on and win like that is nice.”

His last section was a concern for Bravo with Kayda Shae having had a limited preparation following his impressive placing in the Topgun 13 days earlier.

“He hadn’t done anything all week. He had a couple of little things that we didn’t really want to push him through which was starting to worry me a bit at the end. I thought that it might have been a bit too much of a spell, but we couldn’t have done it any other way and it worked out OK in the end.

“He shares a lot of traits as Kilty Lad (Kayda Shae’s sire, also trained by Bravo), always switched on and always tries, never ever takes a backward step and is always pushing through. The whole association with Kayda Shae is amazing, with Kim Edgar being a first time owner and Brian Parkinson breeding him. It’s all pretty special.”

Kayda Shae’s 11th career win took his earnings beyond $232,000 and continues a remarkable run of success for Bravo. In the last nine days, Bravo has also won the group 2 Great Chase with Unlawful Entry and group 1 Hume Cup with Secret Spell, both of which also won TAB Melbourne Cup Preludes tonight.