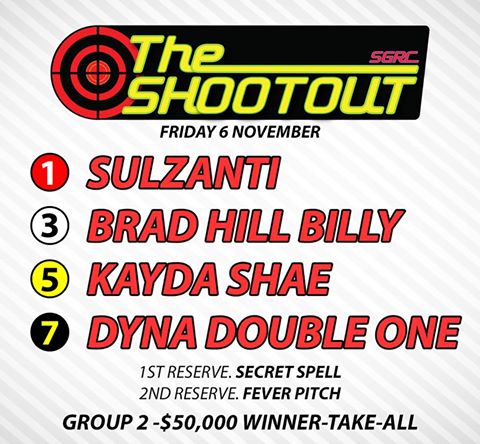 The last greyhound drawn in the preferential box draw, Lisa Delbridge (deputising for trainer Kelly Bravo) had no choice in which box she drew which in a way proved a blessing.

“I said earlier I either wanted to be the first out or last out because she never told me any other box! She watched it online and said ‘oh well, it is what is.’ You can’t change it, but he should get plenty of room from there if he’s good enough.”

Interestingly, seven of the 17 Shootouts conducted have been won from box 5.

Kayda Shae, ran 29.10 when running second in the recent Speed Star, having run 29.12 to qualify for the series. Since, Kayda Shae has twice been placed behind champion Fernando Bale at group 1 level and has been installed the $2.25 favourite for the Shootout by TAB.

Andrea Dailly had no hesitation taking box 7 for her finalist Dyna Double One.

“I was sweating that no one else would take it!” she said.

“He’s probably a little short of where he needs to be which is why he’s in tonight, but with a clear run I reckon he can run 29.0-something. He doesn’t have a lot of early pace but if everyone stays out of his way he can a really fast time.”

The five-time group 1 place getter would line up in race 8 later in the evening, running sixth and was immediately eased from $2.80 to $3 with TAB for the Shootout.

The youngest and least experienced greyhound in the race, Sulzanti, was the first greyhound drawn and kennel representative Jamie Ennis had no hesitation in choosing box 1 for his exciting youngster.

“The two outside dogs are proven group 1 performers and are the ones to beat, but he’ll get his chance from the inside and if he can jump and run his time hopefully that’s enough on the night.

“He’s obviously quick enough running the time he did last week (running 29.09 in a TAB Melbourne Cup Prelude) so hopefully he do the same next week. If he can improve on his first split a little bit and lead he’s in with a big chance.”

In a race geared towards speed, Sulzanti’s 29.09 is the fastest time recorded by the four finalists, however the 25 month old pup will be ceding considerable experience to his rivals when he lines up in the first group final of his 11 start career.

Brad Hill Billy will fly the flag for his adopted state New South Wales after drawing box 3. The outsider of the field, Brad Hill Billy was selected in the race on the back of scintillating runs at Wentworth Park and The Gardens but will enter the final having not had a race start over the distance at the View Road venue.

“He trialled at Sandown before the Launching Pad, and was unlucky in a heat of the McKenna Memorial (595m) so he’s familiar with the track,” said trainer Ray Smith.

“It would have been nice to get the red, but he should get a nice run from there so hopefully he can get a clear run and show what he can do.”

See how the Shootout box draw unfolded below.

The box draw for the Shootout followed the following format –