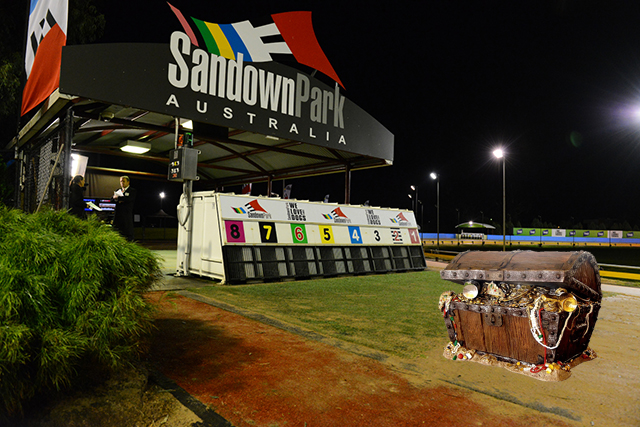 
With the TAB Melbourne Cup just around the corner, racing warms up with a superb 12 race card this Thursday night from Sandown Park.

The ball is set to bounce at 7.09pm and the punting begins early with the second race being a 715m restricted win event.

Dark Obsession stepped up to the 650 at Warrnambool with a supremely dominant win (Replay) and I think against similar opposition he can repeat the dose here.

The treasure chest will open in the fifth race on the program with Mepunga Treasure, who has drawn perfectly in box three. With two slow beginners on her inside and a fast beginning wide runner on her outside, the Jeff Britton trained sprinter should enjoy a perfect run in the early part and, based on her unlucky fourth in better grade last outing (Replay) she looks the best bet of the night here.

All eyes will be firmly set on the second leg of the quaddie with the potential superstar stayer It’s A Plane engaged from box six. The Wayne Vassallo trained pup has produced some incredible performances of late including a 715m debut win running 41.60 (Replay) and an extremely unlucky second placing at his last run (Replay).

The free for all appears a race that could have some genuine Melbourne Cup players running in.Weston East, who was an eye catching run when placed at Sandown Park last week after being cut out at a vital stage. He can bounce back against what looks an outstanding field (Replay).

In the latter part of the meeting I’ll be expecting Captivating and Blue Revolver to prove hard to hold out in their respective races after a string of good form from both sprinters.

The curtain come down on racing at 10.53pm so good luck and happy punting at head quarters!