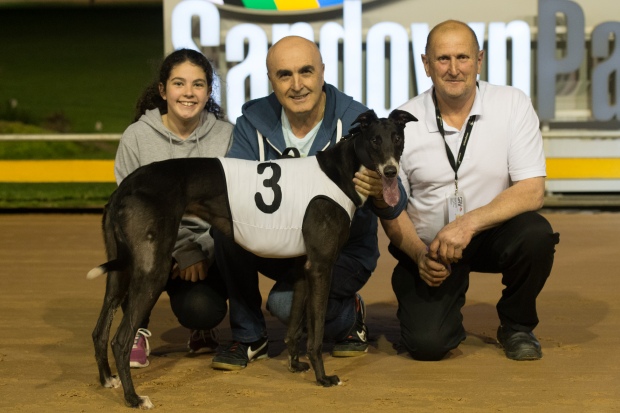 
Cut Loose Max landed a heavy blow to quaddie players on Thursday night when he took out the first leg at big odds.

Cut Loose Max sprung out of box three to set a fast early split of 5.04 and raced away to a five length break down the back straight. He showed no signs of weakness going on to win 5 ¾ lengths in a very smart 29.369.

Although rated a $25 chance in the market, trainer Geoff Howell had a feeling that Cut Loose Max was set to fire.

“He was just absolutely full on in his mood when he got to the track,” said Howell.

Cut Loose Max’s early speed has been inconsistent over his 25 career starts and Howell believes it may be due to his relaxed nature.

“He can jump it’s just a matter of what he wants to do in the boxes. He’s a very relaxed dog – he just about falls asleep in the kennels, sometimes I nearly have to wake him up.

“I think it’s just immaturity, I just hope he can jump consistently and if he can do that, he’ll win more races than he loses.”

Howell trained a greyhound for Palmieri 20 years ago as a hobby trainer, though has recently taken up training full time.

“I’ve mainly been a hobby trainer throughout my career, now it’s more of a full time thing – I bit the bullet and spent a lot of money on my kennels at home. You’ve just got to give them the best environment and keep them happy, that’s the main thing.”

Howell is hopeful of improvement in Cut Loose Max and is optimistic of a feature win.

“I hope he can win a few feature races, I’m not sure how much his speed will improve though I think with maturity he will improve.”