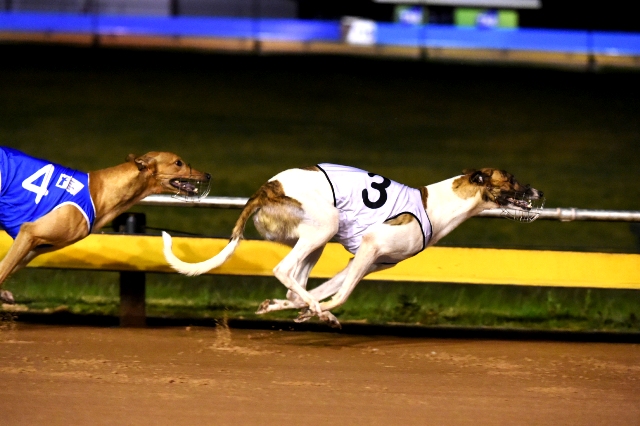 
This Thursday night the best sprinters clash for the chance to represent Victoria in the Group 1 National Sprint final at Wentworth Park on August 22.

.
The racing gets underway at 7.05pm with a grade six final from heats conducted on Sunday. I thought the run of Yeah Whatever was encouraging from box eight in his heat, when posted wide exiting the straight on the first occasion. He eventually battled away to wind up under two lengths from the winner of the race in 29.83 (Replay). With the aid of the inside I expect he should get a lovely clear run into the action early, hopefully eventuating into a win.

.
A rising potential superstar looks set to continue his winning ways in the third race on the program. The Darren Pattinson-trained Blazin’ Bomber has drawn to perfection in his grade five heat. Drawn box two with slow beginners either side, he looks set to receive a clear path to the first bend which will result in a win based on his superb 29.60 performance at The Meadows last outing (Replay).

.
Zipping Maggie drops back to mixed grade after winning the ‘Destini Fireball’ stayers special event two runs back before a luckless run in a heat of the Victorian National Distance series (Replay). With box 1 on her side, the Peter Dapiran trained chaser drops back to a mixed 4/5 over the staying trip for the first time since August last year (Replay), and therefore looks set to bounce back into the winner’s list.
.
The star of Australian greyhound racing, Fernando Bale is looking to continue his dominance jumping from box seven in the State Final of the National Sprint.  However I think he is at some risk of losing just his second race in his past 20 outings at the hands of another Kelly Bravo trained chaser. Kayda Shae produced a tremendous performance last week, sticking to within just on a length of the boom chaser Fernando Bale (see image above). I think the key to this super edition of the Victorian State Final will be the run to the first bend and the fact that Kayda Shae has drawn inside of Fernando Bale could be the telling factor. I think we will be treated to a stunning race that is easily the quality of a Group 1 (Replay).
.
Later on I’m keen on Humming Birdhill, who produced a terrific run to win at Geelong from box eight last Friday night (Replay), and also Quantum Bale, who appears a sneaky each way hope in the eleventh race.