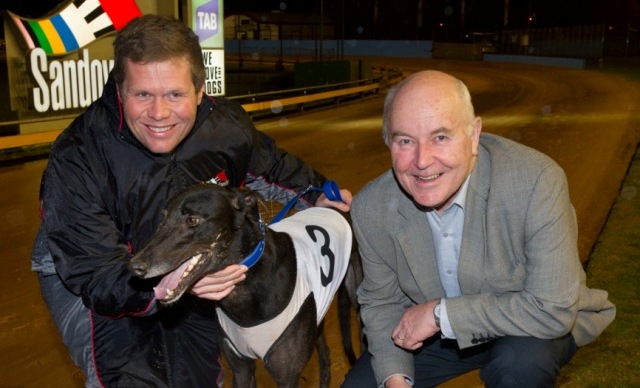 
Margins will represent Victoria at the National Sprint Championship after defeating glamour greyhound Fernando Bale in the Victorian final at Sandown Park tonight.

In one of the finest Victorian finals of modern times, Fernando Bale was sent to the boxes the $1.70 favourite – his longest starting price in 15 starts – but began only fairly by his high standards to sit outside early leader Ronray Spirit through the first turn. With Kayda Shae driving through on the rail, just one length separated the trio coming off the back straight. However Margins took full advantage as the lead trio bunched off the back straight, charging through a gap between runners to win by 2.5 lengths over Ronray Spirit, with Fernando Bale a further half a length away third.

Margin’s winning time of 29.30 was the fastest time recorded on a wet and cold evening not conducive for fast times.

“He had a bit of luck at the first corner,” said co-trainer Jamie Ennis.

“With Ronray Spirit leading and Kayda Shae and Fernando Bale pressuring each other as they got to the top corner together, something had to give. Margins looked like he was going to go around them but he switched back to the fence and got the lucky run on the inside.”

It was the second time in three encounters that Margins has had the better of Fernando Bale.

“I did read something about that, that early in his career he had beaten him. It’s a nice stat but I don’t think it’ll matter much in the final. We’ve been to Wentworth Park a few times so we won’t have to go and trial there so that will be an asset for two weeks time, but obviously Fernando Bale’s record at Wentworth Park outstanding – just ridiculous really – so I’d say he’s still clearly the dog to beat in the final.”

After running third in his Wentworth Park debut, Fernando Bale has since won nine consecutive starts at the Sydney venue including three group 1 finals, a fact not lost on co-trainer George Dailly.

“It would have been nice for him to win tonight, but He’s been up for a while now and it’s hard to keep them up every week. He didn’t have to win tonight to get through to the final, and as long as he’s up there in a fortnight’s time he’ll be hard to beat,” said Dailly.

Fernando Bale punched his ticket to Sydney by qualifying for the Victorian final, guaranteeing a berth in the grand final by virtue of being the Australian Greyhound Racing Association’s number 1 ranked greyhound.

“There’s pressure on every start but given he’d already qualified as the wildcard, there was a bit less pressure for him to win tonight. It would have been nice to win but Jamie’s dog was too good on the night so full credit to him.

“It’s a real thrill to represent Victoria in the Nationals, taking on the best dogs in the country you want to represent your state well and bring the title back to Victoria.”

The $75,000 to the winner National Sprint Championship grand final at Wentworth Park on Saturday 22 August.