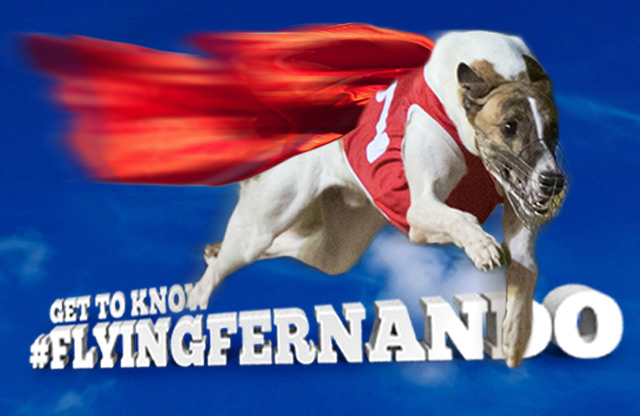 
Fernando Bale is not only the fastest greyhound racing, but the most popular. And when one looks at his record it’s not hard to see why. 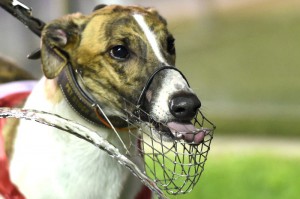 The striking white and brindle speedster has won 25 of his 31 career starts including seven group races – five at group 1 level – and over $790,000 in prize money. ‘Fernando Bale’ trends regularly on Twitter whenever he races.

Fernando Bale’s career got off to an inauspicious start having been unplaced in his first two starts (beaten by a cumulative 27 lengths) before breaking his maiden status with an all the way win in 30.41 at The Meadows. After two more wins at the Broadmeadows circuit, Fernando Bale was defeated at his first starts at Wentworth Park and Sandown, leaving him with a modest record of three wins and a third from seven starts.

His record since then has been unprecedented.

He returned to Wentworth Park and was unbeaten in the three week group 1 National Derby, then won the Western Districts Derby heat and final at Ballarat before being narrowly beaten by multiple group race winner Lamia Bale in a heat of the Australian Cup.

The would be his last defeat in a record equalling 16 starts, a stretch that saw him win the group 1 Golden Easter Egg, Harrison-Dawson and Peter Mosman, the group 2 Bendigo Cup, and group 3 Bill Collins Memorial. His attempt to pass Miss Elly Mint’s consecutive win record failed when he was unable to overcome interference and finished second behind Secret Spell in a semi final of the Maturity, but avenged that defeat with a stunning five length win in the group 1 final, breaking both split records along the way.

That win was his 22nd from his last 24 starts (with two second placings), and lead co-trainer George Dailly to declare that “he is the greatest we’ve had,” a huge wrap from a kennel that is no stranger to exceptional race dogs.

His true dominance is best illustrated by these extraordinary numbers:
• His $790,100 in prize money makes him the highest prize money earning sprinter greyhound in history, and second highest overall
• He has started favourite in 27 of his 31 career starts, including his last 17 starts
• He has been the odds on favourite in his last 13 starts (at an average starting price of $1.28), and started odds on 19 times over all
• His average starting price is $2.14. In his last 24 starts, his average starting price is $1.71
• 19 of his 25 wins have been in the best time of the night
• His average winning margin is more than 5½ lengths
• Has won at least twice from each box
• He has won a group final from each box, other than boxes 5 and 6 (which he hasn’t drawn in a final)
• His 80.64% winning strike rate is behind only Miata (82.35%) among the approximately 150 greyhounds to have won more than $200,000 in prize money
• His average prize money per start is $25,487. Of the 150 highest prize money earners, Sweet It Is has the next highest average earnings of $14,236 per start

As the highest ranked greyhound by the Australian Greyhound Racing Association, Fernando Bale needs only to qualify for next Thursday’s Victorian final of the National Sprint Championship to earn a berth in the Grand Final at Wentworth Park. The rankings are a points system based on performances in group races and further highlights his standing as the best greyhound of modern times. His points of 415 is 230 points higher than the next highest ranked sprinter, kennel mate Dyna Double One (185). In the last seven years, the next highest points score was El Galo with 240.

Fernando Bale will line up in race 4 tonight at Sandown, a track at which he has won each of his last five starts at an average winning time of an extraordinary 29.10. He is one of only two greyhounds to break 29 seconds, and hold three of the eight fastest times recorded at the venue. His average first split time is 4.95 – just 0.05 seconds outside his own split record.

The first of 12 races tonight will jump at 7.09pm, with Fernando Bale to greet the starter at 8.09pm. Entry to the track is free, click here for your free Watchdog form guide.

Ever wondered what it would look like if Fernando Bale combined his best sectionals at Sandown Park? Watch the video below for the amazing result!