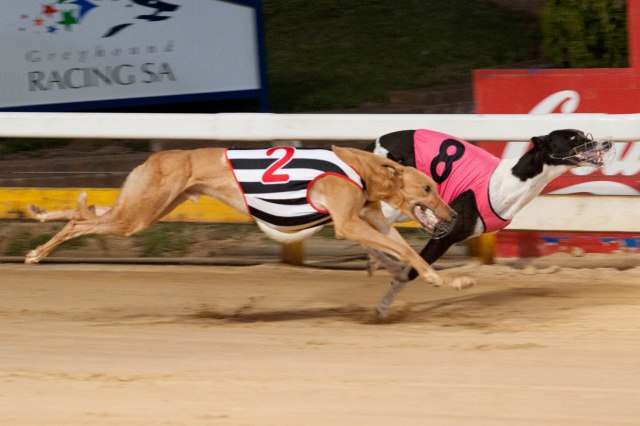 
Metro racing from Sandown Park this Thursday night has a 12 race card set for decision with first due at 7.08pm.

We open our pockets immediately with the highly promising Absolute Power jumping from the three alley in the opening event. The Jason Thompson prepared sprinter kick started his career with some flying wins at Cranbourne including a 30.27 debut win (Replay) and a brilliant 29.94 win at just his second start (Replay). After having no luck in the final of the VBIS series I expect the son of Bekim Bale and Mepunga Nicky (pictured beating Radley Bale in the 2011 Group 1 Adelaide Cup) to stride back into the winners list.

The stayers clash in the third of the night and I’m not confident it’s a great betting race. In saying that I will be super interested to see how the rising Sydney stayer Lithgow Panther handles himself at his Victorian debut from box six.

Droopys Bentley finally draws well in race four of the night. The Tommy O’Donovan trained sprinter hasn’t drawn anywhere near the rails in his past seven starts and he could just be ready to take advantage and strike from the ideal draw.

Weston East returns after a smart 595m win last week (Replay) and from the inside trap he should be repeating the dose once again.

Handy staying proposition Akina Akeira goes around in the ninth of the night and I’m keen on her chances after two unlucky runs at Sandown Park of late. Despite finding bother she has produced her best work and the end of the 715m, which has her as the genuine stayer in this event (Replay). She’ll only need to hold her feet in the early part to prove extremely hard to hold out and I’m confident in saying she will be my best bet of the night.

The racing is set to wrap up at 10.56pm. So go Akeira and happy punting!
.
Sandown Park Formguide: Click Here