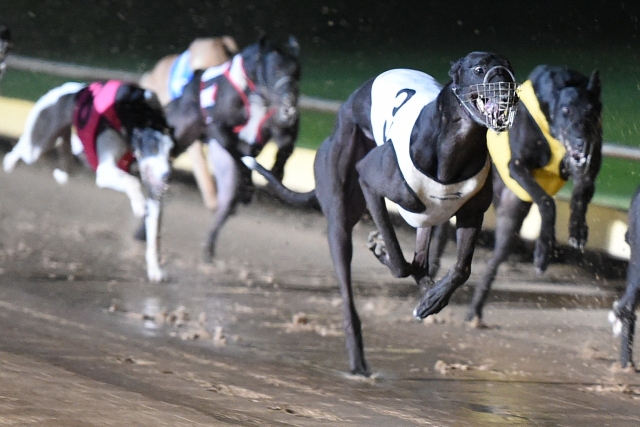 
Racing kicks off at Sandown Park this Thursday night at 7.08pm with a novice final over the 595m where Able Chief and Houston Bale look set to fight the race out.

Who Dey appears perfectly boxed in the second race from the inside draw. Placed at Geelong (Replay) and Sandown Park (Replay) at his last two outings, the son of Nitro Burst looks set to burst back into the winners list. His record from box one speaks for itself with three dominant wins and I’m expecting he’ll add to his tally.

Star sprinter Dewana Result (pictured in rug 3) looks to be in near career best form after a devastating 29.75 Cranbourne win (Replay) at his last outing and his effort two starts back here was second to none when placed (Replay). Drawn ideally to get the lovely cart through into the action, I expect he’ll position in the first three heading to the back which will allow him to prove too classy late.

The RSN racing and sport grade five final highlights the night of chasing and Ronray Spirit appears set to rack up another win. He produced, in my opinion, one of his best performances to win his heat in 29.62 (Replay) despite finding himself trailing the leaders down the back straight. The son of Cosmic Rumble swept into the lead on the corner and kept going to a 1.5 length win which has him as the one to beat here. With a noted wide runner drawn his outside and speed on his inside, I expect the Terry Reid trained chaser to receive a lovely clear run early resulting in another feature race win.

The free for all looks a spectacular race with miss consistent Lamia Bale and the in form 2014 Melbourne Cup winner Dyna Villa expected to fight out favouritism but I don’t believe it’ll be a two dog race by any stretch of the imagination.

Late in the program I’ll be placing small each way bets on the likes of Natural Oak and Miss Suzie Que. With the last set to go a share earlier than normal at 10.54 pm, it’s good luck and happy punting!

That wraps up the Sandown Park preview for this Thursday night.
.
Sandown Thursday Formguide: Click Here