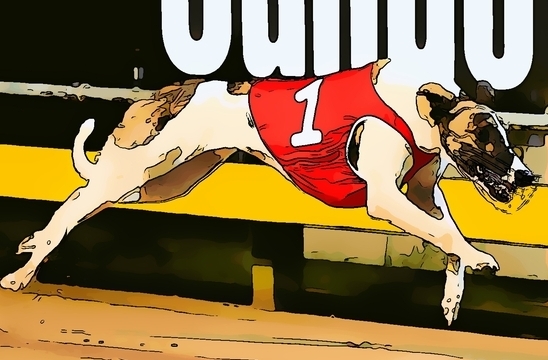 
Paul Wheeler is no stranger to a fast dog, having bred some of the greatest chasers of modern times. But even he is in awe of Fernando Bale.

“Most greyhounds are good at one thing in a race – they’re fast early, or they’re exceptional mid race, or they’re strong at the end,” he said.

“But he’s brilliant at every stage. To date, he looks like the perfect greyhound.”

Despite being just 26 months of age – most greyhounds reach their peak at around 30 months of age – Fernando Bale has already won 17 of his 22 races, three group 1 finals and $517,000 in prize money. His current nine race winning streak has catapulted him from highly regarded youngster to one of the all time greats.

In his last four starts at Sandown Park, his average winning time is 29.065 while averaging 4.96 to the first split. He became the second greyhound to break 29 seconds, smashed the second split record and equalled the first split mark. His $1.40 average starting price is better than bank interest – but only just.

“I consider him to be the most reliable beginner I’ve seen in the 40 years that I’ve been involved in the greyhound industry. He’s simply breathtaking at the moment,” said Sky Racing greyhound expert Mark Duclos.

“I learnt my lesson the hard way with Fernando when I tipped against him in the Golden Easter Egg final from box 8, but not anymore. There’s no doubt he is the best and fastest sprinter in Australia at the moment and waiting for him to miss the start is akin to waiting for real estate prices to fall… I’m not sure when that might be!”

“For more than three decades I’ve been watching greyhound racing and there’s no doubting the ability of Fernando Bale,” he said

“The way the greyhound jumps from the boxes and charges to the line there’s nothing more spectacular.”

Fernando Bale faces his toughest task on Thursday night, lining up against five group race winning dogs and two group 1 runners up in a race that Sandown CEO Greg Miller rates as the best he’s seen in his 30 years in the sport. The eight runners have combined for 14 group race wins and $2.49m in prize money and interestingly includes the last greyhound to defeat Fernando Bale in a race, last start group 1 Sapphire Crown winner Lamia Bale.

His popularity among punters is clear – he opened a $1.20 favourite with tab.com.au for tomorrow night’s group 3 Bill Collins, a week after jumping $1.05 favourite in the group 1 Harrison-Dawson.

Indeed, the white and brindle son of Kelsos Fushileer is so popular that ‘Fernando Bale’ was trending on Twitter Australia wide last Thursday night.

“He’s certainly the most popular greyhound in the country at the moment, people haven’t been this excited about a greyhound since Miata retired,” said Sandown’s Racing and Media Manager, Mick Floyd

“Being by an American sire, there is plenty of interest in him in the States, and his racing deeds have attracted plenty of attention in the UK and Ireland.

“Despite it being cool and a bit wet last Thursday night, there was a crowd of people three deep to get a look at him in the parade yard before his race, and everyone wanted to get a picture of him after the race.

“And really, it’s little wonder why. He’s a striking looking white greyhound, and from a racing point of view I’ve never seen a greyhound consistently that brilliant from the boxes in my time here. He really is the complete package.”

His popularity with punters and fans is sure to be matched by his popularity with breeders. Despite already garnering considerable interest for future stud duties, Wheeler has no plans to retire his star to the lucrative stud scene.

“We’ve registered him at stud and have collected some semen but there’s no plans to retire him yet,” continued Wheeler.

“I’d like to see him get to 40-50 starts before we look at stud, as long as he avoids an injuries there’s no plan to retire him.”

Fernando Bale will jump from box 1 in race 6 at 8.52pm on Thursday night. The group 3 Bill Collins Memorial is the support race for the world’s richest race for stayers, the $250,000 group 1 RSN Sandown Cup which will jump at 9.35pm.

The Dog, The Money or The Box? Click here for your chance to win $500 cash!